Projects in Alberta and Pennsylvania illustrate the present benefits and future potential of petrochemical development. 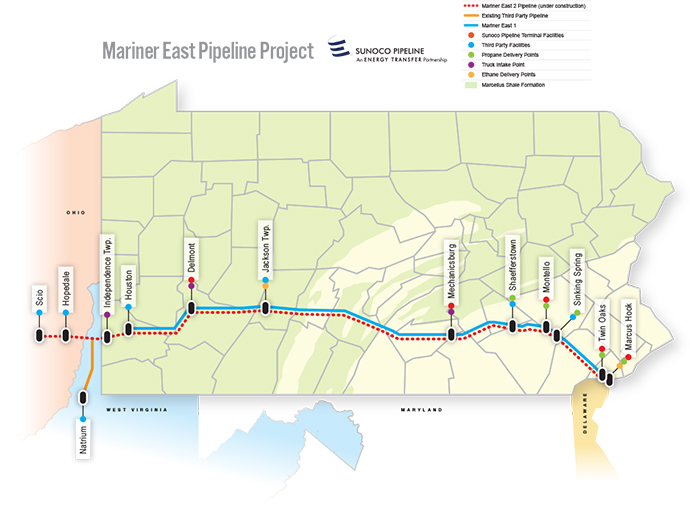 This map shows the crucial infrastructure relationships connecting the Mariner East pipeline to Marcellus Shale development and other opportunities in the tri-state region.
Map courtesy of Energy Transfer Partners
by ADAM BRUNS

You’ve heard about the Shell cracker in western Pennsylvania, and other major complexes either already rising or soon to arrive on the Gulf Coast. But other regions also continue to move toward petrochemical hub status too.

Calgary-based Inter Pipeline Ltd. in December announced that its board of directors has authorized the construction of a world-scale C$3.5-billion integrated propane dehydrogenation (PDH) and polypropylene (PP) plant — the Heartland Petrochemical Complex — in Strathcona County near Fort Saskatchewan, Alberta, near the company’s Redwater Olefinic Fractionator (ROF), which along with other third-party fractionators in the region will supply propane feedstock.

The Heartland Petrochemical Complex will be designed to convert locally sourced, low-cost propane into 525,000 metric tons per year of polypropylene, a plastic used in the manufacturing of a wide range of finished products. Construction of the complex will continue in early 2018 with completion scheduled for late 2021. Facility design is well advanced with approximately C$400 million invested to date in engineering, procurement and early civil works.

“Alberta is an ideal location to construct a world-scale propane based petrochemical operation,” said Christian Bayle, Inter Pipeline’s president and CEO. “Driven by attractive feedstock and utility costs, the Heartland Complex is expected to be one of the lowest cost polypropylene producers in North America. This dynamic should result in attractive profit margins given the premium pricing this plastic currently receives in the North American market.” 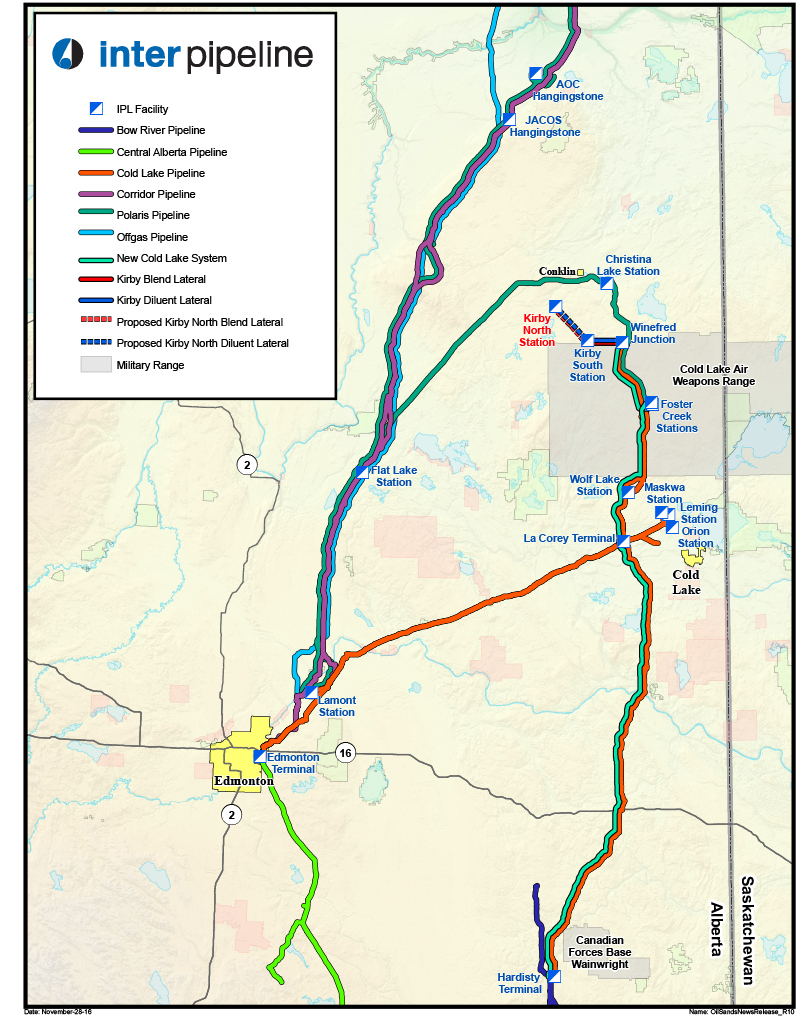 Like the Pennsylvania map, this map shows the interrelationships among pipelines and Inter Pipeline’s facilities in the Greater Edmonton area.
Map courtesy of Inter Pipeline

Detailed engineering for the PDH plant was awarded to Fluor Corporation in 2013 and is now approximately 85 percent complete. Inter Pipeline has also completed early civil work at the site in preparation for facility construction activities in early 2018. Linde Engineering was awarded the front-end engineering design contract for the PP facility in 2017, and work is currently approximately 70 percent complete. Construction of this component of the complex is scheduled to begin in the second half of 2018.

Other construction activities associated with the project include product storage facilities and rail loading assets to facilitate the transport of polypropylene pellets to various North American markets.

“This investment represents the largest organic growth project in our history, and a key part of Inter Pipeline’s growth strategy,” said Bayle. “The Heartland Complex is highly complementary to our existing natural gas liquid processing activities and is structured to provide a new source of material long-term cash flow.”

When contracting is complete and the complex is in operation, Inter Pipeline expects to earn approximately C$450 million to C$500 million per year in long-term average annual EBITDA. Inter Pipeline will also benefit from C$200 million of royalty credits received from the Government of Alberta’s Petrochemical Diversification Program in December 2016. The credits were provided in support of the construction of the propane dehydrogenation plant and will be monetized over a three-year period once the complex is operational.

Inter Pipeline has completed over C$6.4 billion of developments in the last 10 years, but this is the biggest ever. Inter Pipeline assumed responsibility for the potential construction of a world-scale PDH facility when it acquired Williams Companies Inc.'s and Williams Partners L.P.'s Canadian natural gas liquids midstream businesses.

A company investor presentation from December lays out the rationale for the project, stating that Alberta-produced polypropylene expected to have one of the lowest cash costs in North America, with low utility costs and an oversupplied propane market in Western Canada driving a long-term, low-cost feedstock advantage. The majority of PP production to be sold into US markets, “which are expected to have among the highest prices globally,” says the company. Moreover, the construction environment in Alberta is favorable. The project is expected to generate over 13,000 full-time equivalent (FTE) jobs for Canadians over the four-year construction period and around 180 FTE jobs once operational.

Among the attributes of the Strathcona County site:

The company also pointed out that the “lack of major project development in Alberta results in favorable engineering, procurement and construction environment, including availability of skilled labor.”

The C$200 million in royalty credits from the province will be available to Inter Pipeline once the PDH facility is in operation. The credits can then be sold to oil or natural gas producers which use the credits to reduce their royalty payments.

Carbon Competitiveness Incentives (CCIs) replaced the Specified Gas Emitters Regulation in Alberta on Jan. 1, 2018. It is expected to attract investment in clean technology, protect and create jobs and diversify Alberta's economy while reducing carbon pollution. Acclaimed by renewable energy leaders, the CCIs are the product of extensive consultation with industry and will be phased in over three years. Companies will have further incentives to invest in innovation and technology to create jobs and reduce emissions through a C$1.4-billion innovation package also released in December, which includes C$440 million for oil sands innovation alone. 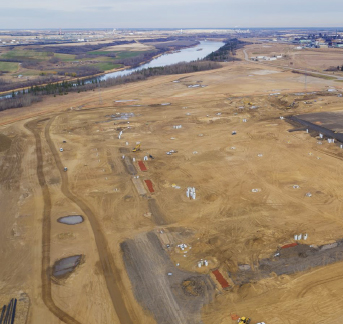 This image from a December investor presentation by Inter Pipeline shows the site where the company’s C$3.5-billion Heartland Petrochemical Complex will rise in Strathcona County, Alberta.
Map courtesy of Inter Pipeline

“For Alberta to prosper and our economy to grow, we must recognize that the global economy is changing and that climate change is real,” said Shannon Phillips, Minister of Environment and Parks and Minister responsible for the Climate Change Office. “That means a smaller carbon footprint and helping our companies compete around the world. That’s what this improved framework will do.”

The CCI regulation applies to facilities in sectors such as power production; oil extraction, upgrading and refining; natural gas processing; and chemical manufacturing that have emitted 100,000 metric tons or more of greenhouse gas emissions (GHGs) in a year since 2003.

Phasing in Prosperity in Philly

Across the continent, the economic promise of reborn refineries appears to be very real.

A new report commissioned by Sunoco Pipeline L.P. and its parent company, Energy Transfer Partners, L.P., and released January 8 by the Philadelphia-based economic consulting firm Econsult Solutions, Inc. (ESI) finds that the Mariner East pipeline project will generate more than $9 billion for the Pennsylvania economy during construction, support 9,500 construction jobs annually over a six-year period, and sustain up to 530 permanent jobs when complete. 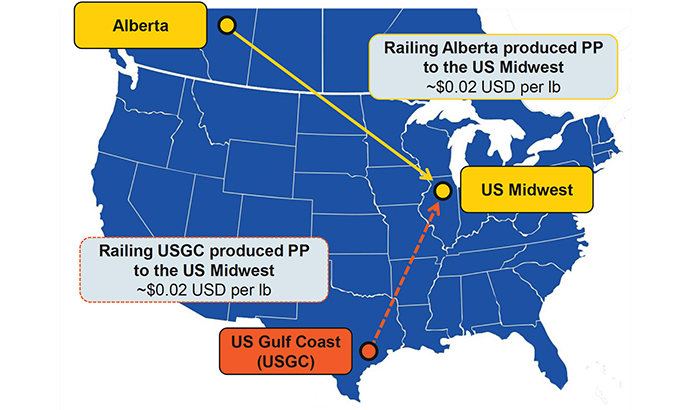 This slide from Inter Pipeline shows the Heartland Petrochemical Complex’s competitive position vs. similar complexes along the Gulf Coast.

"The revival of MHIC via the Mariner East pipelines demonstrates the tremendous capacity for energy production in southeastern Pennsylvania," said ESI President and Principal Stephen P. Mullin. "Through Energy Transfer Partners' ingenuity in transporting the vast supply of natural resources like propane from the Marcellus shale, Pennsylvania has become a leader in distribution of natural gas liquids (NGLs), providing a platform for increased business and job opportunities in the region."

Among other key findings:

The momentum has been building among the area’s resurgent refineries for some time, and includes projects such as Delta’s 2013 acquisition of the Trainer refinery as a hedge on growing jet fuel costs.

Site Selection Executive Vice President Ron Starner documented the ongoing family of projects in this January 2016 Investment Profile. And leading stakeholders chronicled the refineries’ comeback from the brink in a riveting presentation at the Brownfields 2013 conference in Atlanta, as reported in this September 2013 Site Selection story.

The ESI report provides insights into the evolving energy landscape of Pennsylvania and the rise of NGLs, such as butane, ethane, and propane, whose production has increased and is forecasted to continue to increase in the U.S. It projects that the expansion of the Mariner East pipelines and the introduction of the Revolution Project will boost the transportation, storage, and distribution capacity of NGLs in southeastern Pennsylvania, creating a supply for home and commercial heating as well as manufacturing and industrial feedstocks. In Pennsylvania, Mariner East will provide ethane for power generation and industrial applications, propane for heating, and butane for gasoline production.

Additionally, MHIC has become the major distribution center for NGLs from the Marcellus shale and is creating new opportunities for the U.S. economy. The report anticipates that the transition of MHIC from an oil refinery to an NGL transport and processing center will have economic effects beyond the boundaries of the Mariner East pipelines and MHIC, giving the Commonwealth the opportunity to regain some of its prominence as a manufacturing center. 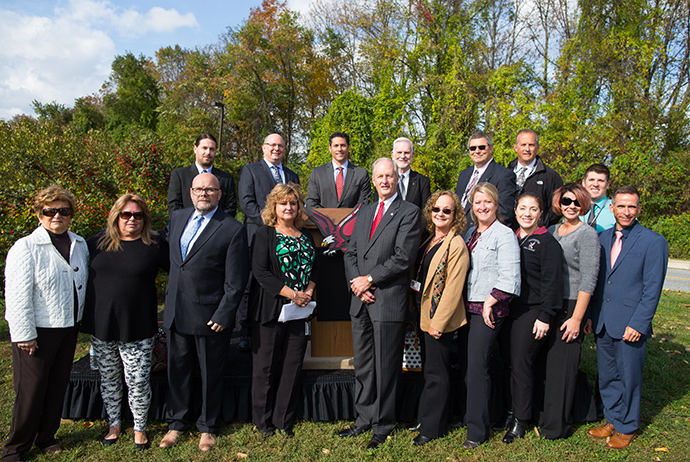 Borough, school district, and Delaware County officials joined Sunoco Pipeline representatives in October to announce the results of a recent reassessment of the Marcus Hook Industrial Complex that will add an additional $4.8 million in property taxes to the Chichester School District, Marcus Hook Borough, and Delaware County.
Photo courtesy of Energy Transfer Partners