McKinsey & Co. profile the impact of bringing solar power to the people in Kenya.

NPR’s Steve Inskeep hangs a temporary shingle with CBS News and drives way across the state of Texas to report this story about why the state known for its fossil fuels is leading the way in renewable power.

Contrast that journey with this June piece for Fortune by Jeffrey Ball and photographer Benjamin Lowy, who explore “Friday Night Lights” territory as the latest oil boom continues in the Permian Basin.

London-based Envision, a global smart energy solution provider, announced this week a strategic partnership with Bow Power to evaluate, develop, and operate utility-scale wind farm projects in Latin America, starting with a 90-megawatt project in Yucatan, Mexico. “Envision is committed to bringing advanced technologies to support Mexico in its energy transformation,” Envision Group Executive Director Felix Zhang said. “We are committed to creating a clean and sustainable future while lowering the levelized cost of energy.”

“Mexico is in a challenging state of demand for the energy sector. KCS is well-suited to provide direct resources of LNG, gasoline and diesel products from our customer base to Mexico. Mexico’s consumption looks to continue to create an import need for energy products over the next several years. KCS plans to be a significant part in helping Mexico fill this demand.”

The Waterways Journal provides insight into the U.S. energy sector via trends in barge rates.

Montana Governor Steve Bullock and the Bonneville Power Administration early this month released the Montana Renewables Development Action Plan, which finds that the state currently has more than 700 megawatts of installed wind capacity, with the potential to develop significantly more wind resources. The report also finds that there is existing capacity to transmit that power to the Northwest.

“We’ve always known that Montana had the most energetic wind resource in the region. This collaborative process reveals that existing transmission — with modest investments — can deliver considerable amounts of renewable energy to West Coast utilities,” said Rachel Shimshak, executive director of Renewable Northwest and a member of the Task Force Steering Committee. “This is great news for customers, the environment, and Montana’s rural economic vitality. Washington and Oregon utilities should be confident that they can cost-effectively deliver Montana wind to their customers."

The Colorado Petroleum Council, a division of the American Petroleum Institute, in June released a report finding that the natural gas and oil industry has seen both environmental progress and economic opportunity. Among other findings by the pro-industry group, the industry in the state:

In case you were wondering if Northvolt’s battery-making dreams in Sweden were more dream than reality, it got a lot more real in late May when Siemens stepped up with major cash and a pledge to purchase the company’s batteries when the first plant is complete.

Back in its native Germany, Siemens through its Siemens Gamesa unit in June inaugurated production at a new nacelle plant in Cuxhaven that should employ around 850 people by the end of this year. "With our new plant in Cuxhaven, Siemens Gamesa is sending a clear signal regarding the power of renewable energy,” said Markus Tacke, CEO of Siemens Gamesa Renewable Energy. “Numerous innovations continue to make offshore wind power even more competitive with other sources of industrial power generation. Lowering the levelized cost of energy from offshore wind is a key focus area for us, benefiting our customers, ratepayers, and society at large.” 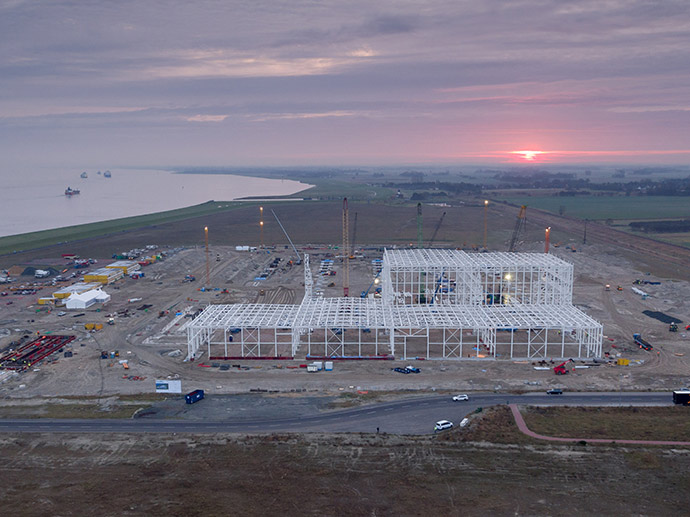