In addition to parkland and housing, some closed golf courses are turning into solar power plants. 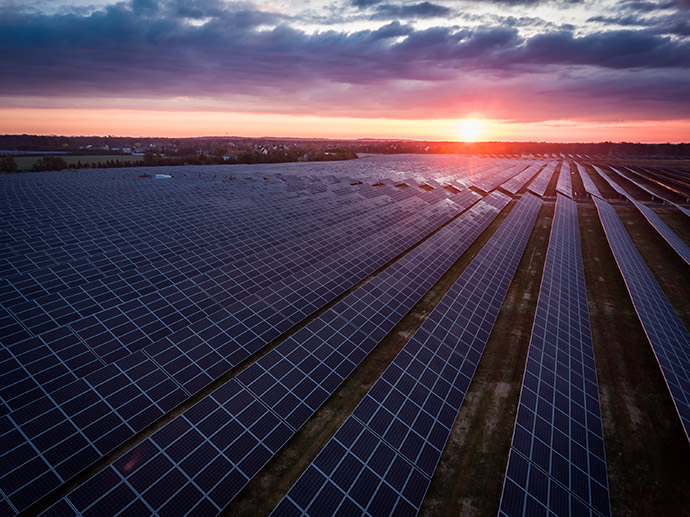 The late comedian George Carlin reserved a special place in his brooding heart for the game of golf, which he considered "meaningless, mindless, arrogant, elitist … boring" and a few other unprintable adjectives.

"There are over 17,000 golf courses in America," he said in one of his most famous rants. "They average over 150 acres a piece. That's 3 million-plus acres — 4,820 square miles. You could build two Rhode Islands and a Delaware for the homeless on the land currently being wasted …"

Carlin also had strong opinions about the state of the planet and our meager attempts to right the situation. But the Bronx native, were he still around to nettle us, might have managed at least a rueful grin at what's transpiring on Long Island, just up the road from his birthplace. 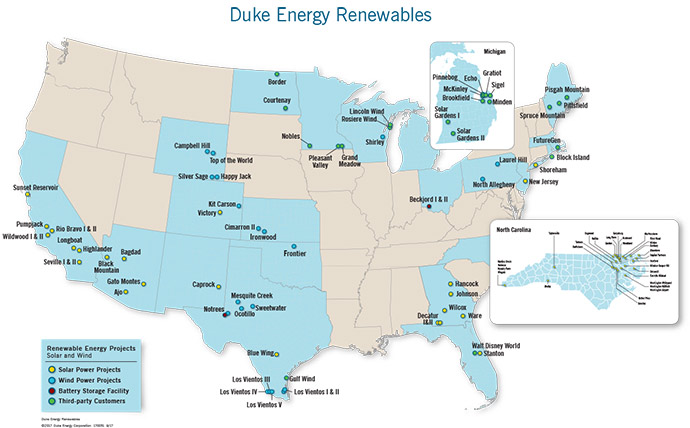 Earlier this month, Duke Energy Renewables completed the acquisition from Invenergy of the 24.9-megawatt Shoreham Solar Commons project, located on the site of the former Tallgrass Golf Course in Brookhaven. It was placed into service July 1, and the Long Island Power Authority (LIPA) is purchasing the power under a 20-year agreement.

The project is expected to generate between $700,000 and $900,000 in annual tax revenue. The energy produced is estimated to displace 29,000 tons of greenhouse gas emissions annually and create nearly 1 million megawatt-hours (MWh) of renewable energy over its lifetime.

"Repurposing the former Tallgrass Golf Course into a solar site eliminates the use of pesticides and fertilizers on the property, protecting Long Island's fresh water aquifer," said Invenergy's EVP and Chief Development Officer Bryan Schueler. "We also planted 2,000 trees on the site, providing further environmental benefits in addition to the generation of renewable energy."

Duke Energy Renewables' utility-scale wind and solar assets total about 2,900 MW across 14 states from 21 wind and 64 solar projects (see map). The power produced by the projects is primarily sold through long-term contracts to utilities, electric cooperatives, municipalities, and commercial and industrial customers. Chicago-based Invenergy has developed more than 19,900 megawatts of projects that are in operation, construction or contracted, including wind, solar and natural gas power generation projects and energy storage facilities around the globe.

There is plenty of precedent for solar energy on golf courses, which in some cases is installed simply to green up the greenest places on earth. Tracy Golf and Country Club in San Joaquin County, California, for instance, last summer installed a 688-panel solar system expected to put a major dent in the club's annual $100,000-plus power bill. The main power usage? Running the pumps to irrigate the course.

The project was estimated to save the club as much as $1.8 million over 25 years (about $72,000 annually), club leaders told the Tracy Press, noting that expenses were more of an issue as membership had dropped from 400 before the Great Recession to just 60 as of last summer. The club began accepting non-member play in 2014.

The sound of crickets is nationwide. Comedian Carlin's cited figure of 17,000 courses had dwindled to about 15,000 by the end of 2016, according to annual figures reported by the National Golf Foundation. Asked to provide the latest figures from their recently published members-only report, a National Golf Foundation spokesperson told me the organization's research staff were too busy with member needs to provide the information from their recently published report.

A June article in Realtor magazine cited golf industry trade group Pellucid in stating that the number of regular golfers dropped from 30 million in 2002 to 20.9 million in 2016. It also cited Atlantic Monthly CityLab reports as the basis for asserting that "hundreds of thousands of acres of land nationwide" are available for redevelopment. And National Golf Foundation leaders were quoted as recently as early 2017 saying around 150 to 175 course closures were expected yearly in the next few years as what they called a "natural contraction" occurred after a spree that saw some 4,000 courses open between 1986 and 2005.

Overseas, the fairway-to-green journey is being led by, among others, Japanese electronics manufacturer Kyocera, which installed a 23-MW solar farm at an abandoned course in Kyoto Prefecture and planned to pursue a 92-MW installation at another closed course in Kagoshima Prefecture.

When the Kyoto project was first announced in July 2015, the company also announced its potentially larger ambitions overseas:

"In the United States, several cities in states such as Florida, Utah, Kansas and Minnesota are having public discussion and considering proposals on how best to repurpose closed golf courses," Kyocera stated. "Overdevelopment of golf properties during the real-estate boom of the 1990s and 2000s has led to hundreds of idle courses today that are now under analysis for repurposing or redevelopment. Many of these properties are now being reconsidered as sites for new housing development, parkland and a wide range of other commercial uses, including solar farms. Solar can provide a particularly productive and environmentally friendly use for defunct golf courses, which are characterized by expansive land mass, high sun exposure, and a low concentration of shade trees.

In May, the company announced that its solar subsidiary had completed construction of a 29.2-MW utility-scale solar power plant in Yonago City, Tottori Prefecture, on land originally designated for a golf course and other purposes, but subsequently abandoned.

A total of 108,504 Kyocera solar modules will generate an estimated 36,080 MWh per year — enough electricity to power approximately 12,000 typical households. All electricity generated at the plant will be sold to the local utility (the Chugoku Electric Power Co., Inc.). "Since Tottori Prefecture has a Japan Sea coastal climate with heavy snow and short hours of sunlight during the winter months, it is not always considered to be a suitable area for constructing a solar power plant," said the company. "However, the company overcame such difficulties by optimizing installation methods to allow for weather conditions of the area and ensure sufficient power generation capacity."

The new project is one of 63 solar power plants with 215 MW of output that Kyocera TCL Solar has constructed since it was established six years ago, including a 21.1-MW project in Hagi City, Yamaguchi Prefecture, that opened in January on land originally slated for an industrial waste disposal facility that was abandoned. The company also has built floating solar farms, including a 13.7-MW installation that started operating in March on the Yamakura Dam reservoir in Ichihara, Chiba Prefecture. The company has developed seven floating solar power plants using Japan's freshwater dams and reservoirs rather than agricultural land, "for it is becoming more difficult to secure tracts of land suitable for a utility-scale power plant," Kyocera stated.

Another Japanese golf course redevelopment for solar power reached commercial operation status in June, as the 56.3-MW Yamaguchi Shin Mine project from Canadian Solar kicked into gear. Powered by 173,000 Canadian Solar modules and constructed by LG CNS, it is expected to generate approximately 66,000 MWh of electricity every year. There, as in Yonago City, Chugoku Electric Power Company, Inc. will purchase the solar power, under a 20-year feed-in-tariff contract at the rate of ¥36.0 (C$0.32) per kWh.

"This is the largest solar project we have built in Japan, which once again shows our solar project development capability in this market," said Dr. Shawn Qu, chairman CEO of Canadian Solar Inc. "We are glad to convert an abandoned 27-hole golf course into a solar plant, which will now provide clean renewable energy for thousands of people for decades to come."

George Carlin might have looked askance at such optimistic pronouncements, but he did profess to admire the power of the sun itself.

"Overnight I became a sun-worshipper," he once said of his search for religion. "Well, not overnight, you can't see the sun at night. But first thing the next morning...."

Morning is a special time for a golfer — the only thing more beautiful than a well-struck shot may be the moment when those first rays of sunlight strike the dew-covered grass. But an increasing number of fairways may soon be welcoming solar megawatts instead of tee shots.

At the current rate of golf course closures, the sight of repurposed fairways for the common good may soon become more common.
Photo courtesy of Duke Energy Renewables