Two pilot projects from Renault put self-driving EVs to work in a Normandy city and on a Portuguese island.

Renault and EEM last month rolled out the Sustainable Porto Santo - Smart Fossil Free Island program on the island of Porto Santo in the Autonomous Region of Madeira, Portugal.
Images courtesy of Renault
by ADAM BRUNS

What do the nation of Portugal and the French region of Normandy have in common besides windswept coastlines and important ports of call?

As of this year, they're both home to autonomous vehicle (AV) programs aiming to connect smart cars with smarter regions.

It's the same goal that experimental AV projects have the world over, from southeastern Michigan to Pittsburgh to the neighborhood in Tempe, Arizona, where a fatality occurred earlier this month, prompting the state to suspend AV testing by Uber, pending a full investigation. Uber had been testing in Arizona since 2016, after moving from California in an effort to find a less onerous regulatory environment.

The projects are among what Bloomberg Philanthropies and the Aspen Institute tallied in October as 53 AV testing projects worldwide, two-thirds of which had already entered a pilot stage. As of this week, that list numbered 96. 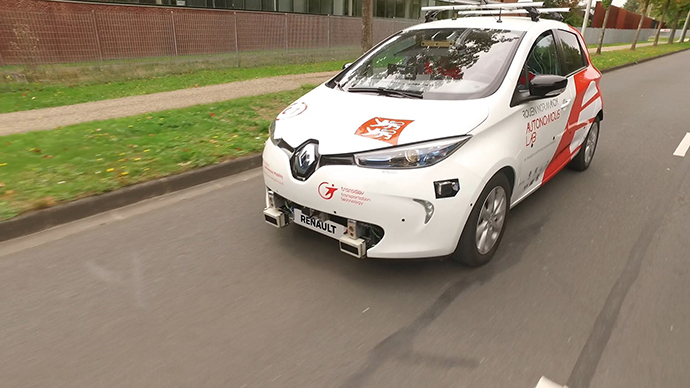 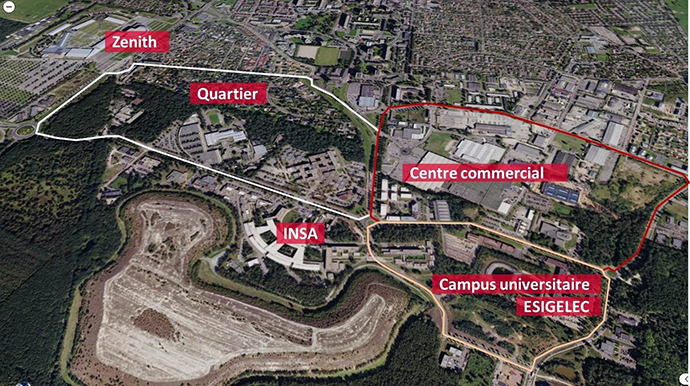 The Rouen AV test project in Normandy involves 17 stops on a 10-km. circuit, traveling among a bevy of research and institutional nodes in the city of 500,000.

The €11-million project (with a 40/60 public/private funding split) is one of the “Smart City” regional experiments fostered since November 2016 by Caisse des Dépôts, which with its subsidiaries form a state-owned group that is a long-term investor serving France's public interest and local and regional economic development. The group is an important contributor to the French budget, to which it transferred €1.6 billion in earnings from 2016.

The Rouen fleet will initially comprise four Renault ZOE all-electric cars equipped with Renault and Transdev technologies (the latter developed in partnership with Delphi, Esigelec and other Normandy-based companies). At a later date, a shuttle using Transdev technologies will complete the fleet.

As a release explains, the vehicles will run on three circuits covering a distance of 10 kilometers (6.2 miles), in Rouen’s Technopole du Madrillet (Saint Etienne du Rouvray), with 17 stops. After an initial testing period, the on-demand service will be open to the public this spring and run for two years. Using a dedicated smartphone application available at each of the seventeen stops on the three routes, passengers will be able to book a ride in real time.

"Developing autonomous transport systems requires a number of core competences," said Renault, "including dispatch, fleet management, telecommunications, sensors and autonomous driving software, as well as expertise in vehicle manufacturing. Transdev, Groupe Renault, and the metropolis combine all of these competences."

For the Rouen region, the goal is to offer citizens a service that is a first in Europe and the first step towards the development of what Renault called "a cutting-edge industrial cluster dedicated to mobility of the future." Transdev has been operating the Astuce city transit system for Métropole Rouen Normandie for over 20 years. It includes a fleet of 310 vehicles including the Metro and "TEOR" Rapid Transit Buses (BRT), equipped with optical guidance since 2001.

Transdev and Groupe Renault are also partners in the EVAPS project (Eco-mobility with Autonomous Vehicles in Paris-Saclay), a €16-million project funded with the support of the “State Investment for the Future” program managed by ADEME (French State Agency for public policies in the field of environment, energy and sustainable development) and leveraging the expertise of VEDECOM Institute for Energy Transition, SystemX Technological Research Institute and the Paris-Saclay University. EVAPS aims to develop smart mobility services, using autonomous vehicles in and around the Paris-Saclay urban community.

Métropole Rouen Normandie’s "ambition to become the European capital of autonomous mobility is not only to create new services in response to the needs of energy transition," Renault explains, "but also to develop in the metropolis and in Normandy a real cutting-edge industrial cluster, leveraging the local ecosystem. Furthermore, the experiment marks the first phase of a much wider project for the region of half a million people, called “Normandie smart mobility for all."

Meanwhile, little EVs can also be found darting driverless around the island of Porto Santo, part of a two-island archipelago with Madeira. In February Renault and EEM (Empresa de Electricidade da Madeira, SA) — which produces, transports and distributes and sells electricity on the archipelago — launched a smart electric ecosystem on Porto Santo, as part of the Sustainable Porto Santo - Smart Fossil Free Island program rolled out by the Autonomous Region of Madeira.

"This world's first smart island uses electric vehicles, second-life batteries, smart charging and V2G [vehicle-to-grid] to boost the island’s energy independence and stimulate the production of renewable energy," said the partners of the project, which is expected to last 18 months.

“We are delighted to be teaming up with EEM and Madeira Regional Government today to establish this unprecedented smart electric ecosystem which demonstrates to what extent the electric revolution is changing our everyday lives beyond just transport," said Eric Feunteun, Electric Vehicles and New Business Program director at Groupe Renault. "Our aim is to build a model that can be carried over to other islands, eco-districts and cities, while consistently striving to achieve large-scale rollout of electric mobility solutions that are affordable for all.”

I) Twenty volunteer users in Porto Santo will drive 14 ZOEs and 6 Kangoo Z.E.s for their everyday use, benefiting from smart charging thanks to the 40 connected public and private charging points set up by EEM and Renault on the island.

II) By the end of 2018, the vehicles will step up their interaction with the grid by providing it with electricity during peak hours. "In addition to being smart charged, the electric vehicles will therefore also serve as temporary energy storage units."

III) Second-life batteries from Renault electric vehicles will be used to store the fluctuating supply of energy produced by Porto Santo’s solar and wind farms. Stored as soon as it is produced, this energy is recovered by the grid as and when needed to meet local demand. Some of these batteries come from Madeira Island. "For the first time, Groupe Renault demonstrates real life re-employing of second-life batteries in a local ecosystem," said the company. 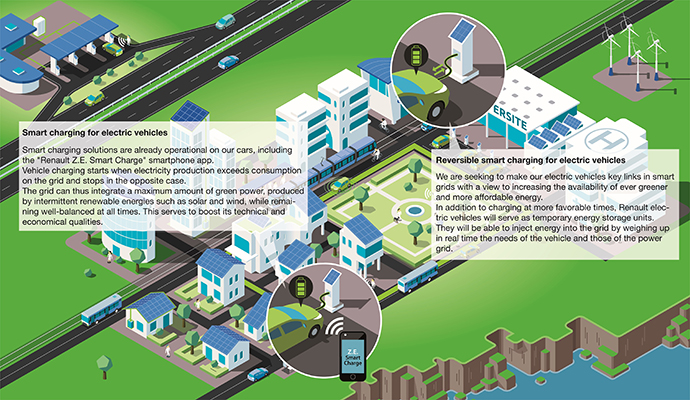 The Porto Santo pilot project features use of second-life batteries and deployment of V2G (vehicle-to-grid) technology.