A new manufacturing plant will create 500 jobs, while a new wind farm creates electrons for GM. 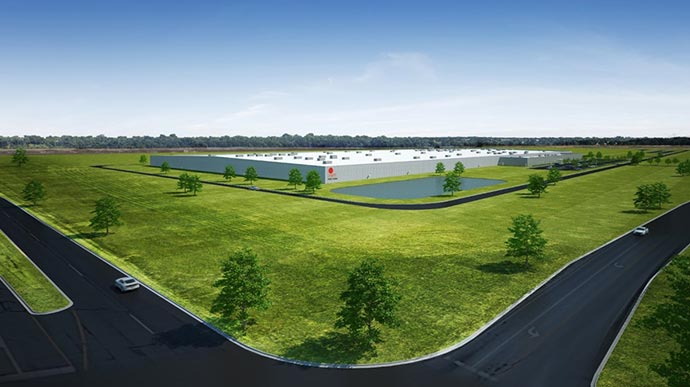 First Solar's head office is in Tempe, Arizona. But its manufacturing heart has always been in northwest Ohio.

The expansion plan calls for a 1 million-sq.-ft. facility, with construction expected to begin in mid-2018 and entering full production mode in late 2019. "The plan is contingent on confirmation of state and local incentive packages currently in negotiation," said the company. Rudolph Libbe Inc., of the Rudolph Libbe Group, will serve as design/build contractor for the project.

"Strong demand in the U.S. for advanced solar technology, along with recent changes in U.S. corporate tax policies, have encouraged our decision to grow First Solar's U.S. production operations," said Mike Koralewski, First Solar's senior vice president of global manufacturing. "State and local officials and JobsOhio have also worked with us to create a business-friendly environment that supported our objectives. These factors, combined with our own economies of scale in high-tech manufacturing, make expanding U.S. operations an attractive, win-win opportunity." 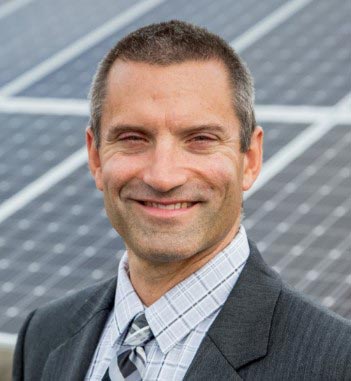 “Investing in renewable energy is good for our communities and our environment, and also for our bottom line. Our renewable energy investments like this one will provide us with clean, affordable energy for years to come. It will also create good jobs in Ohio.”
— Rob Threlkeld, Global Manager of Renewable Energy, General Motor

Koralewski said the plant will have an annual payroll of approximately $30 million. He also indicated First Solar has options for potential further manufacturing expansion in the future, depending on sustained U.S. demand for advanced solar technology. In 2017, the company invested $175 million into retooling the original Perrysburg plant for production of its new Series 6 product. This April, the facility re-started an idled Series 4 production line to meet continued demand for that product.

"Expanding our U.S. manufacturing is particularly exciting," said Tymen de Jong, First Solar's COO. "We originated in Ohio, and we're proud to build on that history as we grow into the future." Since its inception in 1999, First Solar has invested approximately $3 billion in the state: The flagship Perrysburg plant is the largest solar manufacturing facility in the United States, working with more than 250 U.S. suppliers and indirectly supporting more than 4,000 jobs across Ohio. The company also has production facilities in Malaysia and Vietnam.

A Hard Wind is Gonna Blow

Last year when I visited the area where the northwestern Ohio region, the wind was blowing so hard it knocked over trucks on I-75.

In late April this year — on nearly the same date as First Solar's announcement — officials from General Motors and Starwood Energy Group joined state and local elected officials and local businesses to unveil the Northwest Ohio Wind Farm, a 100-megawatt wind development in Paulding County, south of Defiance, that will help power all of GM's Ohio and Indiana manufacturing facilities and move the company closer to meeting the electricity needs of their global operations through 100-percent renewable energy by 2050.

As documented by Site Selection Senior Editor Gary Daughters in the magazine's May issue, the wind farm is expected to be on line by the end of September. "Thirty-seven of the farm's 42 turbines have been completed," Daughters reported, "with the remaining five in the final stages. GM has set a goal of powering its 350 manufacturing plants in 59 countries with renewable energy by 2050. The pending completion of farms in Ohio and Illinois will signify that automaker has achieved a full 20-percent of its goal, according to GM officials." 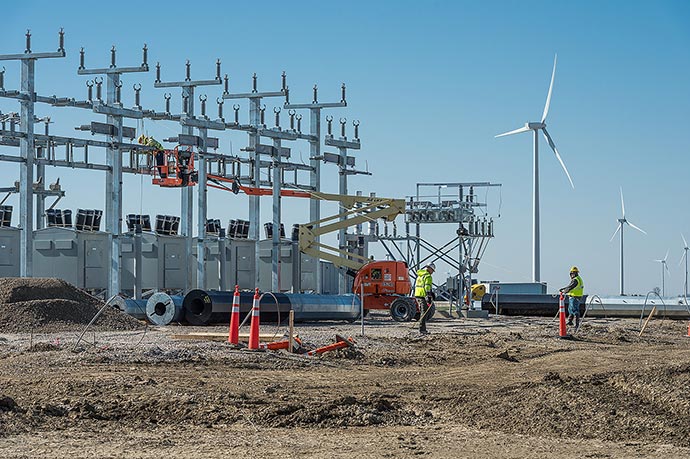 GM will power its Ohio manufacturing plants by plugging into the Northwest Ohio Wind Farm, a 42-turbine facility scheduled for completion this year.
Photo courtesy of Byrum & Fisk Communications

"The Northwest Ohio Wind Farm is the fourth wind power facility to be erected in Paulding County, with a fifth on the drawing boards," Daughters reported. "The new facility is expected to generate close to $1 million in additional tax revenue of the county, most of which will be funneled toward schools and other county services."

Among the other wind farms in the area is another 100-MW installation from Amazon Web Services (AWS) and EDP Renewables, which was temporarily delayed by changing state regulations with regard to setbacks and to employment of Ohio-based construction workers. The AWS investment is related to its family of data center investments in the central Ohio towns of Hilliard, Dublin and New Albany. The company has more recently spoken of adding as many as 12 more such centers in the state, provided it can get an energy pricing discount. But in the meantime, it's filling its energy portfolio with more renewables.

Tony Zartman, a Paulding County commissioner serving for over nine years, said EDP's first wind farm in the area had been paying close to $1 million a year to the county for four years, with another farm from Iberdrola paying around $650,000 a year for three years running. 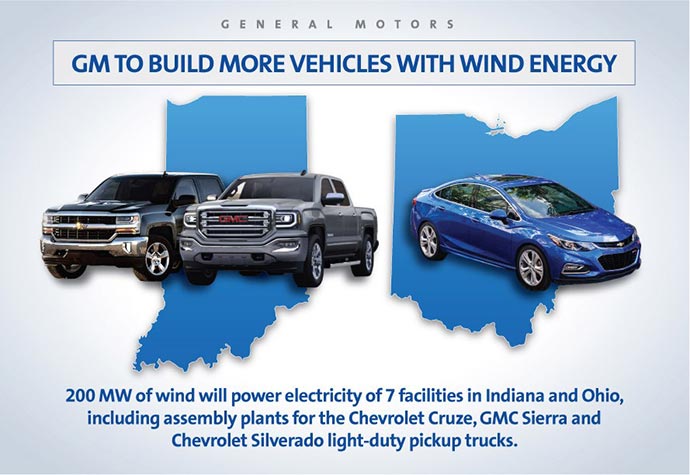 "It's changed the landscape — our schools have new money," Zartman told me. "It's been a very positive influence. Residents who live around the towers recognize the importance of them for the community."

So do the landowners. When it comes to their payments, Zartman said, "I look at each one of those towers as basically the same as an entry-level position for these landowners. And there are oodles of landowners — not just the tower locations, but power line transmission, access roads, any acreage in the build site. They're eligible to get paid for the wind going across their property."

With other wind projects coming to the region, what used to be blowback from those concerned about noise, environmental and visual effects of the towers has turned instead into wind in the area's economic sails. Jerry Zielke, director of Paulding County Economic Development, said the level of activity even led a cement contractor busy with the wind installations to build its own new building.

"Our community, with their acceptance of renewable energy, has had so few complaints and more praise," said Zartman, illustrating that small towns aren't boxed in by small-town thinking. "We welcome change and innovation," he said. "We are not afraid of it. Some places in Ohio, you wouldn't have this wind farm. It's awesome the way the community has accepted the change, and seen it as a positive — it's not only making our earth green again, but the benefits for citizens are less tax dollars, and better parks and education." 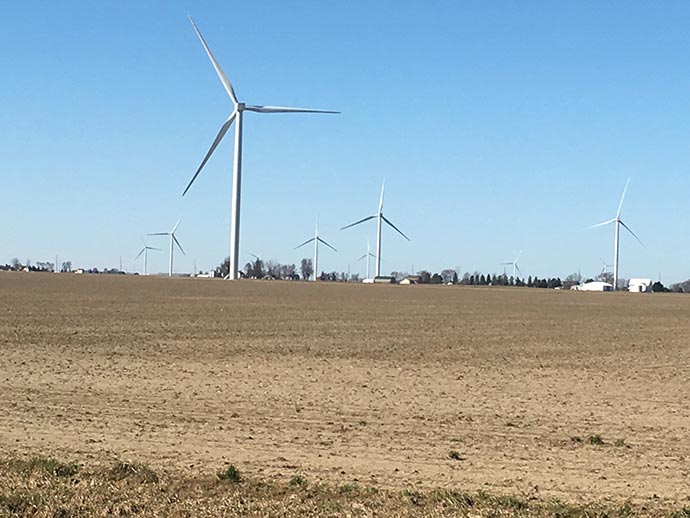 Multiple wind farms are contributing directly to Paulding County’s quality of life via regular payments to landowners and to the county.
Photo by author