Soup’s On in New Jersey

A new project at Campbell Soup Company’s world headquarters showcases a company and a state leading the way in solar power deployment. 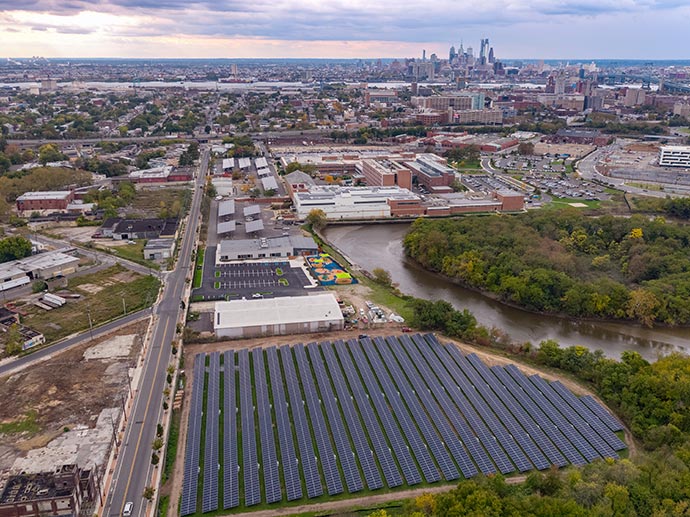 Campbell Soup Company and its partners announced in March that a new 4.4-megawatt solar array was up and running at its world headquarters in Camden, New Jersey.
Photo courtesy of Campbell Soup Co.
by ADAM BRUNS

When Campbell Soup Company and its partners in March announced the official launch of the company's 4.4-megawatt solar power project at its world headquarters in Camden, New Jersey, it signaled a company and a state reaching the next level in solar-fueled sustainability.

The Camden project features rooftop, carport and ground-mount solar solutions, with 2.7-MW arrays installed across the HQ campus and an additional 1.7-MW ground mount array on an adjacent 4.5-acre remediated brownfield that BNB Renewable Energy Holdings purchased specifically for the project, making use of otherwise unusable land and increasing the capacity of the system.

The system will generate more than 5 million kilowatt hours of electricity per year, or the equivalent of approximately 20 percent of the annual electricity usage at the 38-acre (15-hectare) headquarters campus. Under the terms of a 20-year power purchase agreement (PPA) with BNB, Campbell has agreed to purchase all electricity from the array at a predetermined rate. "The fixed PPA rate, which is currently well below the cost of traditional electricity for Campbell, provides the company with significant savings on power as well as a long-term visibility for this portion of its electricity costs," said the company.

"Campbell's renewable projects are delivering clean energy to the grid and demonstrating the viability of energy sources like solar. They contribute to our long-term sustainability strategy and deliver on our commitment to expand renewable energy," said Jim Prunesti, vice president of global engineering for Campbell Soup.

"Bringing a cost-saving solar system to Campbell's world headquarters marks a great moment, and we see a bright future for other Fortune 500 companies who follow Campbell's lead and turn to renewable energy to stabilize energy costs and reap rewards from the sun," said Matthew Baird, managing partner of BNB, when construction got underway last May.

The Camden project is jointly owned by BNB and ORIX USA, a diversified financial company with a strong commitment to renewables. BNB is managing the project under a 20-year management services agreement with the project company, BNB Camden Solar LLC. The debt is being financed through utility PSE&G's Solar Loan Program. The project will also feature five electric vehicle-charging stations, provided by PSE&G via its EV
Workplace Charging Program, for use by Campbell employees.

Campbell's sustainability initiatives were among the leading reasons the company earlier this month was ranked No. 12 among all large-cap Russell 1000 companies in the Corporate Responsibility Magazine's annual 100 Best Corporate Citizens List, and was included in the top 100 for the ninth consecutive year.

Campbell Soup in April was saluted among the nation's leaders in corporate adoption of solar energy by the Solar Energy Industries Association (SEIA) in its annual Solar Means Business Report, which tracks solar deployment by corporate end users through 2017.

Among that report's key findings:

New Jersey, says the SEIA, ranks No. 5 nationally in installed solar power, with 2,389.87 MW. Prices have fallen by 55 percent in the past five years, and solar now accounts for 3.72 percent of the state's electricity generation. Total solar investment comes to more than $7.6 billion — PSE&G alone has invested a substantial portion of that. And solar accounts for more than 7,100 solar industry jobs. 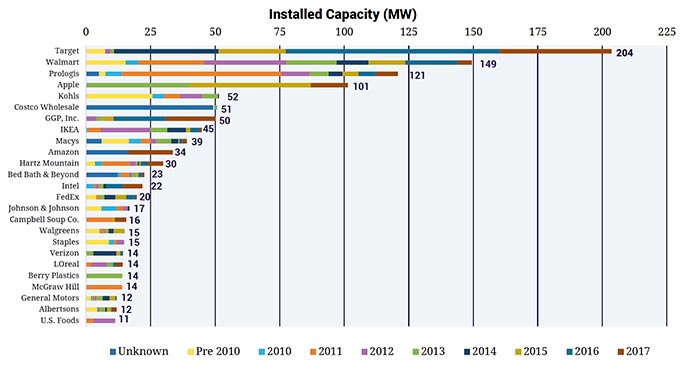 Though retailers dominate the Solar Energy Industries Association annual list of corporate solar power deployers, Campbell is right there in the mix.
Graph courtesy of SEIA

"New Jersey has been an early leader in solar and perennial top 10 solar state," the SEIA reports. "The New Jersey Solar market continues to be strong and is driven by net metering, a solar RPS [renewable portfolio standard] and an accompanying SREC market."

Other notable solar installations in New Jersey include the 18-MW Pilesgrove Solar Project completed in 2015 by developer Con Edison and Panda Energy; a 14-MW installation by Berry Plastics in Phillipsburg; and a 10-MW installation from L&D Landfill Solar in Mt. Holly.

Those locations aren't the only places in the state where solar and industrial property are coming together. Next month, Brownfield Listings is partnering with New Jersey Innovation Institute, the New Jersey Institute of Technology (NJIT) and several nonprofits such as the Center for Creative Land Recycling to convene an event called Brightfields 2018 in Newark on the NJIT campus.

Half the event is devoted to what Brownfield Listings CEO Dan French calls a Solar Market Mixer, directly connecting landowners with solar developers in short, face-to-face meetings. At the first Brightfields event last year in Chicago, says French, "Lots of projects made love connections, so we're actually 'making a market' here. Amesbury, Massachusetts, had a huge response to the RFP it shopped at the event. Registration is much higher this time around. We've already had over 4,500 acres sign up for the Solar Market Mixer."

French says New Jersey has been "an interesting state with a lot of solar potential. It's in a region with generally higher electricity prices, it has a big residential and commercial consumer base and it also has a lot of intense industrial uses sucking up a lot of power. And electricity prices really matter to the industrial sector — 20, 30 or even 40 percent of an industrial company's monthly operating costs can come from sourcing electricity."

The state has a lot of brownfields thanks to its industrial legacy, which French calls "perfect for solar because they typical had electrical service before and often it's harder to do something else on the property." 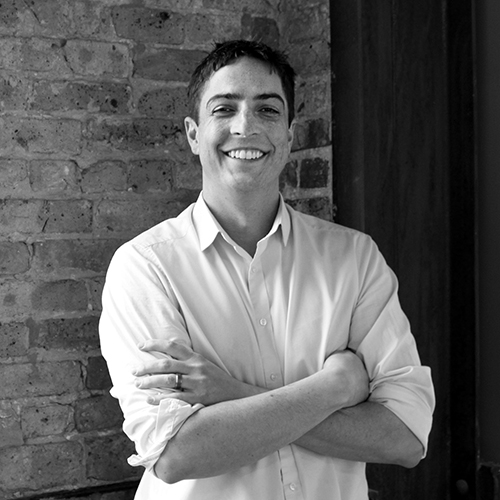 On May 23, he signed a measure that SEIA says "will stabilize the solar market through 2021 by increasing the solar target, closing the current solar renewable energy credit trading program in an orderly way, reducing the overall cost of the current solar Renewable Portfolio Standard (RPS) by lowering the Solar Alternative Compliance Payment, and setting in motion a process for establishing the next generation of solar programs in the Garden State."

French says the state now is cultivating a completely new season of solar growth. "The new legislation will be a hugely constructive force for renewable energy development and bring a lot of green electrons online at the precise moment when the industrial space is undergoing a complete energy transformation. It's great timing and gets New Jersey into the game of building the future of industry, as it has in the past.