With emissions crimes still in the rear-view mirror, Volkswagen ramps up its global commitment to electric vehicles and the recharging stations that feed them. 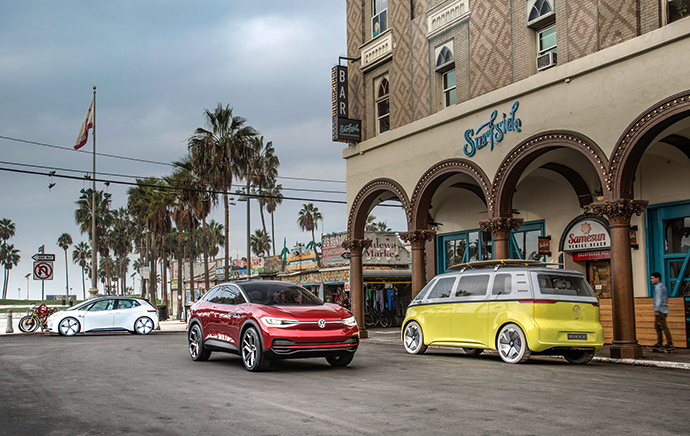 Volkswagen Showcars ID., ID. CROZZ and ID. BUZZ are among the electric vehicle models to be manufactured at eight plants around the world, as VW aims to sell 1 million EVs annually by 2025.
Image courtesy of Volkswagen Group
by ADAM BRUNS

It was nearly two years ago when Volkswagen of America, as penance for its sins of emission, launched a $2-billion, 10-year organization called Electrify America, charged with rolling out electric vehicle (EV) charging infrastructure across the land.

That effort was brand-agnostic: The charging stations are designed to be used by any EV. But this month, the company announced further investments designed to get more VW EVs rolling.

Over the next eight years, the company plans to develop eight manufacturing plants in Europe, North America and China to manufacture its modular electric toolkit (MEB) vehicle, with the goal of selling more than 1 million electric cars annually by 2025. 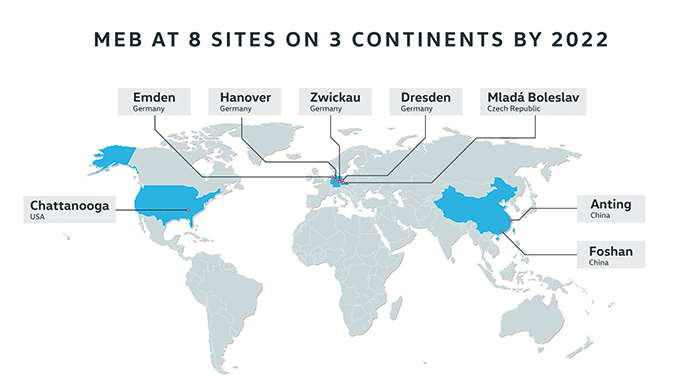 VW’s EV manufacturing plans call for eight plants to be developed over the next three years.
Map courtesy of Volkswagen Group

The company plans to launch more than 20 full electric vehicles, starting at its plant in Zwickau, Germany, where production will start in late 2019. Other MEB plants are being developed at the company’s Anting and Foshan site in China (production coming in 2020); in Emden, Hanover and Dresden in Germany (2022); and in Mlada Boleslav in the Czech Republic.

The first place the company will make MEBs in North America is the same place it picked in 2008: Chattanooga, Tennessee, where the company employs about 3,500 producing the Passat sedan and Atlas midsize SUV. An investment of €700 million ($800 million) is expected to create 1,000 new jobs at the site, with the first ID. CROZZ1 SUV model scheduled to roll off the line in 2022. Volkswagen will also offer the ID. BUZZ1 in North America, its reinterpretation of the classic VW microbus. 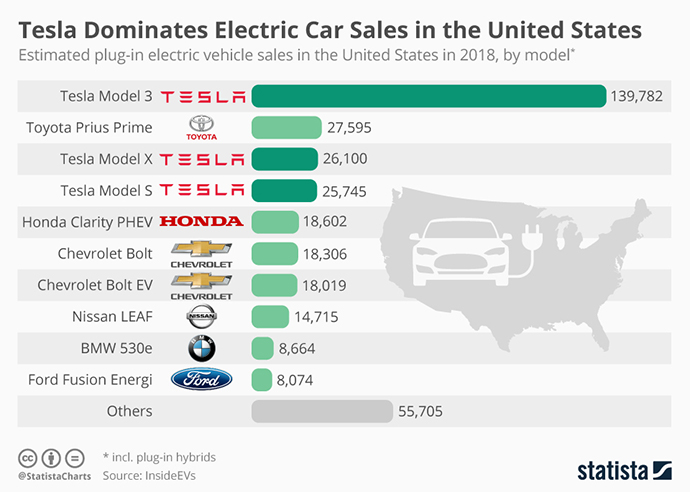 “We could not be prouder to build the future of mobility here in the U.S.,” said Scott Keogh, CEO and president of Volkswagen Group of America. Last March, VW announced an additional investment of $340 million in Chattanooga to build the five-seat version of the Atlas, the Atlas Cross Sport, which will begin production later this year. That brought Volkswagen’s total investment at that time to $2.3 billion, so the new EV investment will take that total to $3.1 billion.

In response to an interview inquiry about the global site selection process for the eight MEB plants, Pietro Zollino, executive vice president of communications for Volkswagen Group of America, said, “Unfortunately we cannot say more than we did in the release regarding the site selection. Later into the development of the extension we will follow up with more details as we move along.”

“The shift toward electric vehicles is a trend that can be seen worldwide, and Volkswagen’s decision to locate its first North American EV manufacturing facility in Chattanooga underscores Tennessee’s manufacturing strength and highly-skilled workforce,” said Tennessee Governor Bill Haslam.

Tennessee ranks No. 1 in the nation for automobile manufacturing employment concentration, including in Spring Hill where GM just announced it would make its new Cadillac crossover. Among the three assembly plants and more than 900 suppliers that operate in 88 of the state’s 95 counties is another major EV operation: Nissan’s complex making the popular Leaf model in the Greater Nashville municipality of Smyrna. 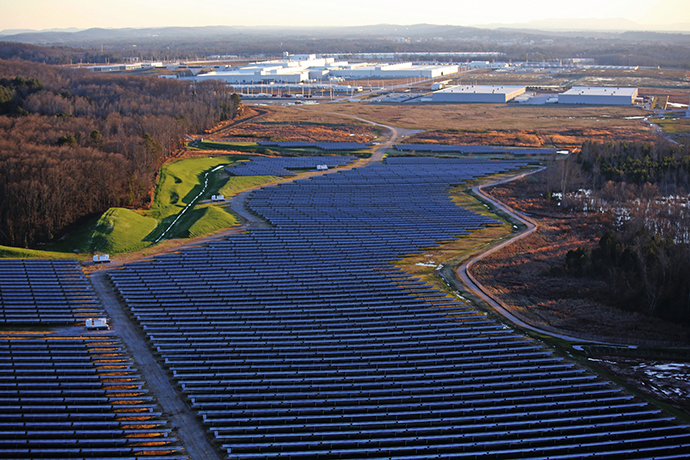 EV manufacturing further enhances Volkswagen’s commitment to sustainability in Chattanooga, which started with LEED-Platinum certification and then a massive commitment to solar power.

Since beginning production there in 1983, Nissan has invested a total of $6.4 billion in the plant, which employs more than 8,000 people producing six models. Battery production was added in 2012. Leaf production started in 2013, with manufacture of the 2018 long-range Leaf (150 miles) launching in December 2017 backed by a $110-million injection of capital. The latest model, the 2019 Nissan LEAF e+, has a 62-kWh battery pack and an EPA-estimated range of up to 226 miles. Sales are expected to begin in spring 2019.

The two Tennessee EV makers have a hill to climb to catch up with U.S. EV sales leaders Tesla and Toyota, both of which make their models in the nation’s EV capital of California. The state aims to have at least 1.5 million EVs in use in the State by 2025. Former Governor Jerry Brown's Executive Order B-48-18 directs state entities to work with the private sector and all appropriate levels of government to spur the construction and installation of 250,000 zero-emission vehicle chargers, including 10,000 direct current (DC) fast chargers, by that year.

Among the charging network pioneers is San Carlos–based eMotorWerk, a subsidiary of Enel Group’s Enel X division, which in September announced it had successfully deployed a 30-megawatt, highly distributed virtual energy storage battery within California since the start of 2017. Over 6,000 eMotorWerks residential JuiceBox and other JuiceNet-enabled chargers installed in California make up the virtual battery, with locations spread across the state and concentrated in the major population centers.

Another California-based charging infrastructure firm, Los Angeles–based EVgo, in August was awarded a contract by the Virginia Department of Environmental Quality (DEQ) to develop a statewide EV charging network. Where did the $14 million come from? From $93.6 million that the Commonwealth was allocated through the Volkswagen mitigation settlement.

EVgo is the nation’s largest owner and operator of public EV DC fast-charging stations with more than 1,000 stations in 34 states across the United States, including stations in Virginia. DC fast charging can deliver a range of 60 to 80 miles for every 20 minutes of charging.

In San Diego, San Diego Gas & Electric (SDG&E) in July submitted an application to the California Public Utilities Commission (CPUC) for approval to implement two pilot programs to make EV charging stations more readily available. One pilot would bring chargers to local parks and beaches, and the other to local schools and educational institutions, including K-12 campuses, vocational schools, community colleges and universities. The programs would allow SDG&E to install about 340 chargers at approximately 50 yet-to-be-determined sites, helping to further reduce range anxiety.

According to an update from SDG&E earlier this month, The San Diego and South Orange County region is now home to about 1,500 public charging stations, including about 160 DC fast chargers. “The number of Level 2 public chargers in our region has increased by about 17.5 percent between 2017 and 2018, and the number of fast chargers (including Tesla superchargers) has increased by about 35 percent,” the utility reported, noting the current installation of about half a dozen more Tesla superchargers.

Another update this month said that EV sales statistics compiled by the nonprofit Veloz found that California had 512,717 EVs on the road,as of Dec. 5, 2018, with about 33,500 of them in San Diego County and South Orange County.

Veloz reported that California had year-over-year increases in sales for all 12 months in 2018, total electric car sales increasing 84 percent from 2017 to 2018. Comparing the start and end of 2018, the state saw a 312-percent increase in sales, compared to a122-percent increase in 2017. The state isn’t stopping there: Hydrogen is the next frontier. In 2018, eight new hydrogen fueling stations opened, bringing the new total to 39, with more than a dozen new stations expected in 2019. But first things first, as the state takes charge of the EV revolution by accounting for roughly half of the entire nation’s EV sales.

“ ‘Electric For All’ is becoming a reality,” said Josh Boone, executive director of Veloz. “As electric SUVs and trucks break into the market in the coming years, everyone will be able to discover a better way to drive, no matter your lifestyle, hobby or occupation. If this growth continues, 2019 will be another record-breaking year.”

“Electric vehicle sales are accelerating at an exciting pace, but to build a truly sustainable market we need to increase public awareness and continue to deploy a range of incentives to spread EVs throughout the state,” said California Air Resources Board (CARB) Chair Mary D. Nichols. A report found that California will need as many as 279,000 chargers by 2025 to support modest growth of electric car adoption. And who’s coming to lead the charge? VW offshoot Electrify America, that’s who.

On December 13, the organization got the go-ahead for its second $200-million investment in California, part of four investment cycles that will bring a total of $800 million in ZEV projects to the state over 10 years. The approval came a week after mixed-use developer Simon teamed with Electrify America to open 10 DC fast chargers at San Francisco Premium Outlets for public use, including eight 150 kW chargers and two ultra-fast 350 kW chargers capable of recharging an electric vehicle at 20 miles a minute, providing 200 miles of vehicle driving range in just 10 minutes.

“We are focused on building a network of charging stations both in the top metro areas and rural communities of California,” said Giovanni Palazzo, president and CEO of Electrify America, LLC, in the Veloz report this month. “The expected growth in new electric vehicles provides a challenge and an opportunity for all of us to accelerate our efforts to build a charging infrastructure for now and in the future … Combined with other providers and the state's commitment to ‘Electric For All,’ these investments will help Californians adopt electric cars in ever greater volumes.”