At the Edge of Disorder

Zeihan: The old world order is gone, but the U.S. is still the dominant force. 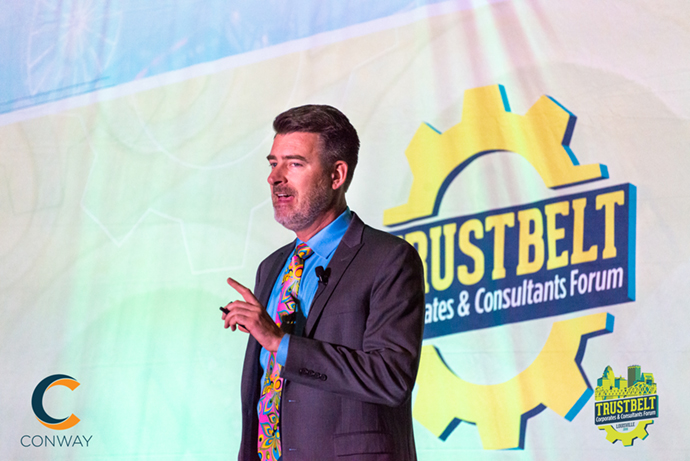 In a world where the global consumption base is disappearing, the United States is poised to dominate due to a robust military and reliable supply chains.

That was one of several conclusions drawn by geopolitical strategist and author Peter Zeihan at the fifth annual TrustBelt Corporates & Consultants Forum on August 20 in Louisville, Kentucky.

He showed one slide to illustrate this point: a photo of a jump aircraft carrier next to a supercarrier in the ocean. Both belong to the U.S. Navy.

“Of the 18 jump carriers that exist in the world today, nine belong to the U.S. Navy,” says Zeihan, author of The Accidental Superpower and The Absent Superpower. “Of the 11 supercarriers in the world, all 11 are American.”

Even if the rest of the world’s navies attacked the U.S., one American supercarrier could take out all nine foreign jump carriers in a battle, says Zeihan.

But he didn’t stop there. If you look at established trade routes, trade relations and supply chains for value-added manufacturing worldwide, the U.S. occupies the most favored position on the planet in all three categories, notes Zeihan. “A U.S.-Japan trade deal will be done this fall and signed this year,” he notes. “That will give the U.S. new trade agreements with all five of our major trade partners.”

“A U.S.-Japan trade deal will be done this fall and signed this year. That will give the U.S. new trade agreements with all five of our major trade partners.”
– Peter Zeihan

He adds that “trade talks with China and Europe will not get done. Trade with both will be limited at best. Meanwhile, Germany is facing extreme risk of supply-chain disruption for value-added manufacturing. The U.S. does not.”

Upsetting the established order is the fact that global consumption is evaporating as the population of industrial nations gets older every year. This includes the U.S., but it also includes Canada, Japan, China, South Korea, Thailand, Germany, Spain, Russia, Italy and Brazil.

“Once your average population age moves above 40, you become a capital-led system,” says Zeihan, “as opposed to a consumption-led system. Millennial consumption has kept the U.S. out of recession since 2009, but the global consumption base is disappearing.”

While President Trump has erected trade barriers through tariffs on China and Europe, only a handful of states are feeling the brunt of the impact. The states that are most dependent on foreign trade are Texas, Louisiana, South Carolina, Kentucky and Washington. Ironically, four of those states swung for Trump in the 2016 election.

Other observations offered by Zeihan include the following: