Train station project will be catalyst for urban renewal. 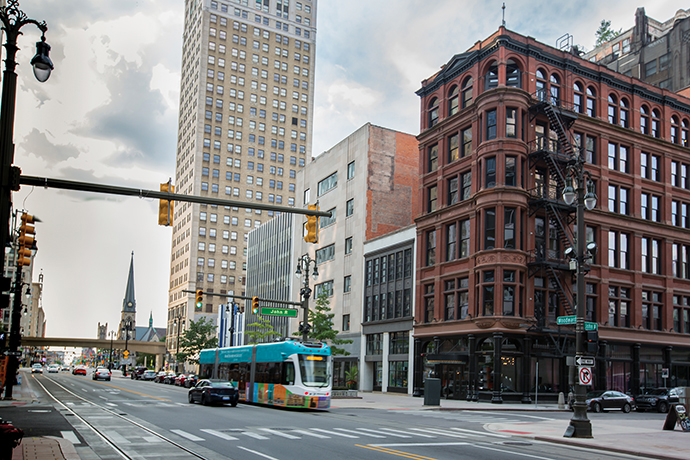 When the book on Detroit's economic turnaround is ultimately written, the second quarter of 2018 may go down in history as one of the most transformative.

According to a report by Newmark Knight Frank, metro Detroit's office vacancy rate fell 50 basis points to 15.6 percent during the second quarter, as more than 848,000 square feet was absorbed.

"The Detroit CBD continues its historic trend of growth, as Ford Motor Company announced major investments into the city that include the purchase of Michigan Central Station," the NKF report stated.

Ford recently announced the purchase of the iconic Michigan Central Station, the 500,000-sq.-ft. railroad passenger hub that had sat vacant for about 30 years and had become a metaphor for Detroit's urban rot. Ford plans to turn the complex into a 1.2-million-square-foot corporate campus that will eventually house 2,500 workers.

"Ford's investment in Detroit follows other major developments in the city over the past five years," says John DeGroot, vice president of research for NKF. "We have now seen five straight years of positive absorption and investments by major companies, as well as a growing workforce that continues to move to the city."

Several factors are contributing to this turnaround, says DeGroot. "Dan Gilbert owns a lot of companies, and over the past five years he has invested heavily in the city and moved a lot of these operations downtown," he says. "Plus, many of the big firms – Microsoft, Google, Blue Cross and others – are moving from the suburbs to the CBD. No one has seen this level of activity in the past 50 years. The tallest skyscraper in Detroit started construction just last month. Vacancies were close to 30 percent a decade ago. They are now just 10 percent."

The NKF report adds other details that reflect this trend. "Little Caesars is nearing completion of its $150-million, nine-story, 234,000-sq.-ft. world headquarters at the corner of Woodward Avenue and Columbia Street," the report states. "Construction on what will be Detroit's tallest skyscraper is underway at the former Hudson's Department Store site. The nearly $1-billion construction project, which is being developed by Bedrock, will feature residential units and retail space along with an estimated 263,000 square feet of office space. In the New Center area, the 290,000-sq.-ft. Albert Kahn Building and 634,000-sq.-ft. Max M. Fisher Building, built in the 1930s, are getting a $100-million renovation."

DeGroot notes that "Detroit had a lot of buildings that were functionally obsolete. Demand to be downtown is driving refurbishment of these facilities to create more living space and more workspace. LinkedIn moved downtown, and other big tech firms are following suit."

Not to be outdone, the Detroit suburbs are showing signs of resurgence as well. "We are seeing demand pick up in the suburbs too," says DeGroot. "Pontiac has seen a lot of activity. United Shore is a mortgage companies that is growing very fast." The firm cast its vote in favor of Pontiac by moving into its new 638,000-sq.-ft. headquarters at 585 South Boulevard in Pontiac.

“We have now seen five straight years of positive absorption and investments by major companies, as well as a growing workforce that continues to move to the city. No one has seen this level of activity in the past 50 years.”
– John DeGroot, Vice President of Research, Newmark Knight Frank

"Farmington Hills is another strong performer," says DeGroot. "Livonia, meanwhile, is a weaker performer. Ann Arbor is doing very well, particularly in the downtown CBD area. Very low vacancies are being recorded there."

Ultimately, says DeGroot, the Ford investment will be a catalyst for even more growth throughout the region. "They will bring thousands of employees to Detroit over the next two to five years, and this will give longevity to the Detroit expansion," he says. "It will attract even more companies to the city. The long-term outlook for Detroit is very good."