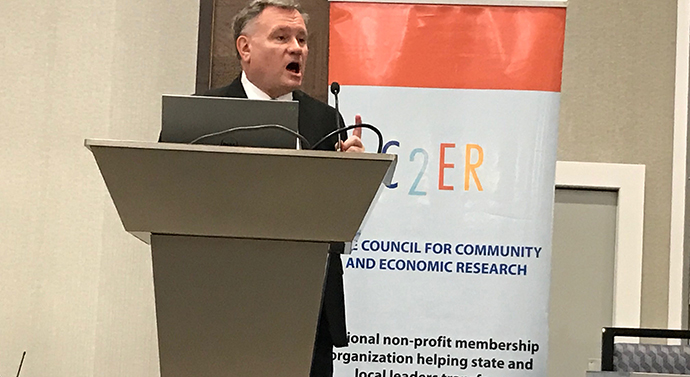 Manufacturing is making a huge comeback in America and is propelling the nation toward its longest economic expansion since World War II.

That was the assessment and prediction of Kennesaw State University economist Roger Tutterow at the annual meeting of the Council for Community and Economic Research (C2ER) in Atlanta on June 6.

"We are now in the 108th month of recovery and showing a relatively low likelihood of recession," Tutterow said to a crowd of 200 research directors representing economic development organizations around the country. "We may even see a GDP growth rate of 4 percent for the current quarter."

While some economists worry about Fed rate hikes and creeping inflation, Tutterow scoffed and said, "We will be in an era of cheap credit for the foreseeable future. Overall CPI is up just 2.5 percent in the last 12 months, and that's a number we want to see. I am not worried about inflation stalling our economic recovery."

As for the question of inflation, Tutterow attacked it head on. "We will see a Fed Funds Rate of 2.0 to 2.5 percent this year," he noted. "That means we will have a Prime Rate of 5.25 percent this year. That puts us still in a low interest rate environment. We are still in an era of cheap credit. And the one thing you can bet on is that the American consumers will continue to borrow money, whether they are in debt or not."

“We are now in the 108th month of recovery and showing a relatively low likelihood of recession.”
– Roger Tutterow

Not everything is coming up roses, however, according to the economist. Two signs of trouble, he noted, were the massive amounts of retail store closings and a dip in automobile sales.

"Are automobile consumers getting tired? We're not sure yet," said Tutterow. "And the biggest game-changer is Amazon. The Bezos effect on retail real estate is real."