How Millennials Are Changing the World of Work 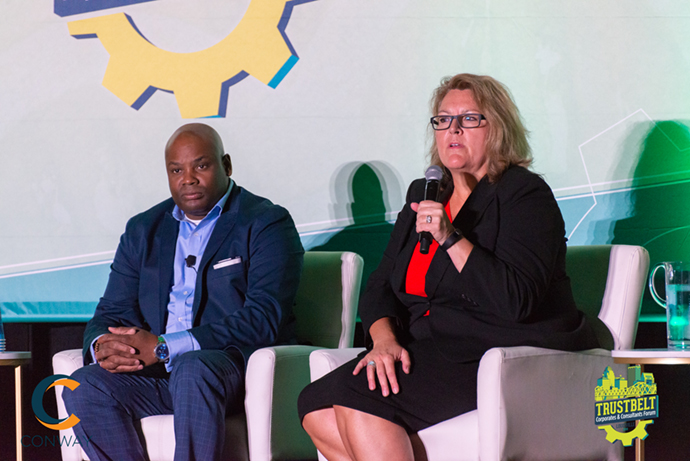 Carine Clark, CEO of Ember, speaks during the Talent Acquisition & Retention panel session at TrustBelt in Louisville. Victor LaGroon of City of Hope joined Clark on this panel.
Photo by Bobby Pereira
by RON STARNER

Want your company to gain a competitive advantage in the marketplace? Throw away every stereotype you have about millennials.

That was the frank advice of Carine Clark, CEO of technology firm Ember in Salt Lake City, Utah.

“It is a different world today,” she said at the fifth annual TrustBelt Corporates & Consultants Forum in Louisville, Kentucky, on August 20. “Kids today are digital natives. They suffer from simultaneous partial attention. My son built a cryptocurrency index when he was 14. They all think they can be entrepreneurs. They are not going to go to an office. Work is not the most important thing in their lives.” And, she added, you won’t be able to win without them.

The biggest thing lacking in most work cultures today is trust, said Clark. And without that, you won’t be able to thrive in the modern world. “Employees today want to be trusted,” she said. “Don’t ask them where they are. Trust them to do their jobs. At Ember, I don’t care where you work. I just want you to be productive.”

“Employees today want to be trusted. Don’t ask them where they are. Trust them to do their jobs.”
– Carine Clark, CEO, Ember

The sooner leaders embrace this notion, and the sooner they realize that every organization today is engaged in a war for talent, the sooner they will succeed, said Clark. “Workers today have options. They care about the perks,” she said. “Not all of them believe they have to be in school. My average employee age at Ember is 23. We look for ways to have cultural contributions to our team. We hire vets. We look for the woman who has been out of the workforce for 20-plus years raising kids. They are terrific workers. This generation of workers is the most diverse we have ever had.”

Clark noted that within 10 years, millennials will make up 50% of the workforce in America. “There are 83 million millennials in the U.S. now. They are more numerous than the baby boomers,” she said. “There will be 1.1 million new tech jobs created in the U.S. by 2024, and yet our graduates in this country will be able to fill only 45% of those jobs. The workforce shortages, especially in the tech sector, are going to be staggering.”

To appeal to the best and brightest, Clark said, an organization must focus on these things:

He added that veterans have proven to be among the most exceptional and most productive workers, and a large percentage of them today are millennials. “I am a post-9/11 veteran,” he noted. “When I was in the military, my fellow soldiers were the most innovative young people I’ve ever seen. You have to engage this generation now, and the reality is that 200,000 soldiers separated from the U.S. Armed Forces last year. Do you see that talent for what it is? Today’s military environment is far more technology driven.”

LaGroon added that partnering with community colleges can make a big difference. “Are you engaged with your colleges? Are you engaged with apprenticeships and internships?” he asked. “How you interact with the workforce will be extremely important. Waiting until they graduate to engage with them is a mistake.”

Clark noted, “I’ve hired interns for more than 30 years. We pay them $20 an hour, and my rule is this: no beast-of-burden tasks for interns. Don’t assign them menial tasks. Ask them to fix your social media. Our interns have gone on to work for Google, Facebook and Amazon. I gave them a chance to visit their future. It’s a great way to pay it forward. Everyone in this room should be a mentor to 20 kids.”