How Not to Mess Up a Site Selection Deal

Prominent consultants give frank advice to communities at TrustBelt. 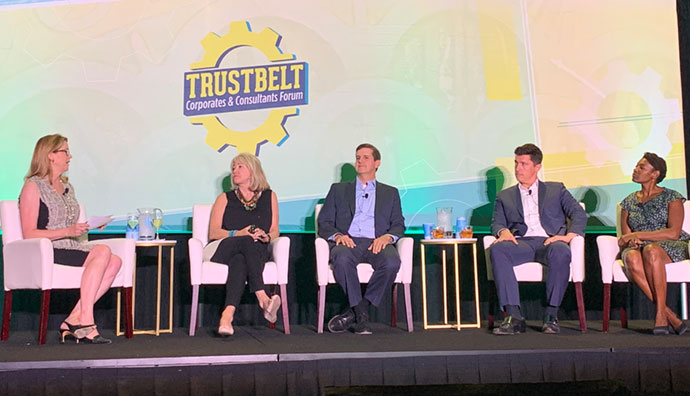 Trade tariffs, a lack of available workers, and the wrong kind of incentives are some of the more common deal killers scuttling expansion projects in 2019, according to a panel of experts who spoke recently at the TrustBelt Corporates & Consultants Forum in Louisville, Kentucky.

When asked to assess the impact of the trade wars between the U.S. and other countries, the five site selection consultants agreed that many deals are being delayed or canceled altogether due to the punitive tariffs being implemented mainly by the U.S. and China.

“It is affecting the industry,” said Carol Henderson, senior director of Cushman & Wakefield. “Tariffs caused a delay in the second phase of a billion-dollar project. Some projects are being delayed indefinitely.”

Susan Arledge, president of Site Selection & Incentives for ESRP Real Estate, said, “Most clients can survive a 10% tariff, but a 25% tariff will devastate most manufacturers.”

In some cases, tariffs are causing a shift in strategy. “We’ve had a solar manufacturer get almost to the goal line and then shift their solar production to India,” said Paul Naumoff, principal and global/Americas leader for Location Investment, Credits & Incentives Services for Ernst & Young. “They had looked at the U.S. West Coast.”

Arledge advised communities responding to project RFPs to be vigilant and precise. “Objective data with no analytical information is the worst response you can give to an RFP,” she noted.

“Most clients can survive a 10% tariff, but a 25% tariff will devastate most manufacturers.”
—Susan Arledge, President, Site Selection & Incentives, ESRP Real Estate

Being small can be an advantage, added Henderson. “My client wants to be a big fish in a small pond,” she said. “They’re looking at tier two and three communities. They don’t want to compete for talent in a big market. That’s why colleges and universities are so key in the recruiting process.”

Incentives also dominated the discussion, with most on the panel saying that incentives normally are not the deciding factor. “Incentives will not make a deal in a vacuum,” said Naumoff. “They can win a deal if everything else is in place. The Chinese are used to a centralized form of subsidy for seven years, and then they expect to be profitable after that. Incentives will be a crucial part of the deal in that case.”

Greg Lux, director of strategic consulting for Cushman & Wakefield, said, “Some companies are more hesitant today to approach the subject of incentives, mainly to protect their brand.” Lux advised communities to “understand whether incentives are even wanted by the client.”

Panel moderator Ann Harts, executive vice president of Site Selection & Incentives for ESRP Real Estate, said, “Clawbacks really scare companies; it is better to have incentives that are based on performance,” while Henderson noted that “our job as consultants is to manage the expectations of the client when it comes to incentives.”

The panel also offered advice to communities on hosting site tours and familiarization tours. Harts emphasized the need for cohesion among all parties at the local level. “If they really work together well, it is evident,” she said. “It is also evident if they don’t.”

Be respectful of time and costs, added Arledge. “I have never seen a time in corporate America when travel budgets were more restricted,” she said. “It is a difficult challenge. Sometimes we don’t have but four or five hours to spend in a community. We are restrained as well. We don’t want to spend time with all of your community partners. If you want to do that, host a dinner with all of them the night before the site visit.”

Harts added that, “wherever you take us, make sure there is the best possible customer service.”

There are also some “must-not-do’s” on site visits, the panel noted. For example, a community should do its due diligence before hosting a prospect, said Arledge. “We showed up one time and the client’s biggest competitor had just announced a 500-job project in the community that same day,” she said. “That was embarrassing.”

Harts shared a story of waking up one morning on a site visit to a local newspaper that featured a front-page article on “why the state cannot attract tech talent. The paper spoke to three tech companies that all talked about why they could not find the people they need there.”

On the positive side, Harts advised communities to “take the client to see something unique behind the scenes. Show them something that not everyone gets to see.”

Other advice from consultants to economic developers included the following: