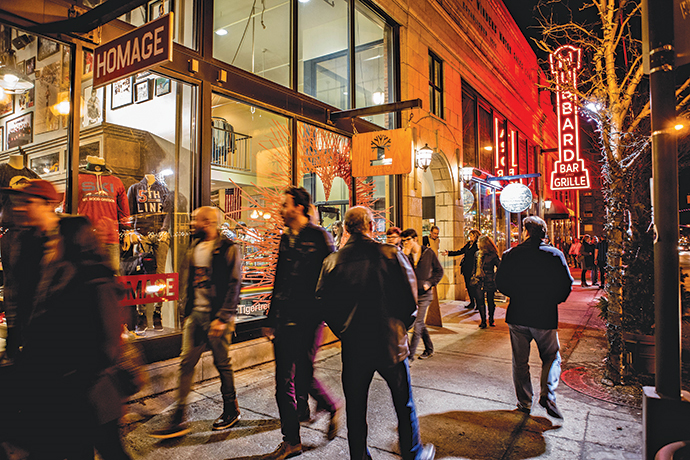 Homage is a vintage sports memorabilia seller that started out as an ecommerce vendor in Columbus, Ohio. This is the type of company that more Midwest metros must embrace and support, according to the Walton Family Foundation.
Photo courtesy of Columbus 2020
by RON STARNER

Is the American Heartland missing out on what drives success in the most dynamic metropolitan areas across the country?

With a few notable exceptions, the answer is yes, according to researchers at the Walton Family Foundation in Bentonville, Arkansas.

A new study authored by Ross DeVol and Jonas Crews concludes that “while the Heartland has several metropolitan areas among the top performers, most metropolitan areas need to participate more fully in the knowledge-based economy.”

Metro areas with knowledge-based economies ranked higher than cities that have yet to make much-needed investments in technology, education, entrepreneurship and commercialization, according to the report titled “The Most Dynamic Metropolitans.”

Why the Midwest is Lagging

“The Midwest does not fare very high in these rankings,” says DeVol. “There are some outliers, such as Midland and Elkhart, and Des Moines does fairly well, ranking 10th among all medium-sized metros. Minnesota has a couple metros that do well. But overall, Midwest metros are mostly in the second and third tiers and some are in the fourth (lowest) tier.”

Various factors help explain this lagging regional performance, he notes. “Many metro economies in the Midwest are tied to agriculture,” he says. “Farm incomes are down. Agricultural prices are down. Chinese retaliatory tariffs on exports of grain have hurt the Farm Belt. And if you look at the ratio of young-firm employment, Midwest towns do not perform as well as the West and other parts of the country right now.”

He adds that technology sectors are under-represented in the Midwest, and too little emphasis is being placed on supporting entrepreneurs in Heartland metro areas. “Investors must be willing to support early-stage firms, and more universities need to embrace commercialization as a critical part of their mission and educational attainment, particularly in science, technology, engineering and mathematics (STEM) for economic progress in the Heartland and throughout the nation.”

“If you look at the ratio of young-firm employment, Midwest towns do not perform as well as the West and other parts of the country right now.”
– Ross DeVol, Lead Researcher and Walton Fellow at the Walton Family Foundation

He cites the example of Midland, Michigan. “Midland is a unique metro area,” he says. “It is very knowledge-based. It’s a company town based on chemicals and the new Dow. They have consolidated all material science assets of three companies into the new Dow. Midland now has the highest per-capita figure of engineers and chemists in the nation.”

Elkhart is booming right now, DeVol adds, because it is the largest producer of recreational vehicles in the world. “From 2015 to 2018, RV sales went up by over 30 percent in the U.S.,” he says. “They have really benefited from that.”

The West is dominating the American economic landscape, he says, because it has a lot of research universities that are focused on technology transfer, and the young-firm share of total employment is very high. “The West is viewed as offering more opportunity for entrepreneurship than the rest of the country,” DeVol says.

A Recipe for TrustBelt Turnaround

For the Midwest to make a comeback, DeVol says, several things must happen at the regional level:

“You don’t have to focus on recruiting the next big manufacturing plant,” says DeVol. “Support entrepreneurs, focus on young firms, and more towns in the Midwest will see results.”