How a Furniture Store in Northern Minnesota Became an Innovation Center 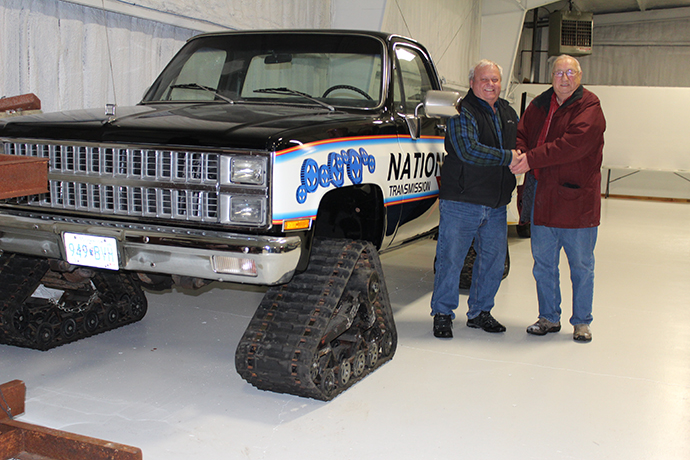 Where better to turn a furniture store into an innovation center than the Moose Capital of the North?

A building in Karlstad, Minnesota, that housed furniture for nearly 70 years will soon become home to historic Mattracks vehicles and memorabilia. Mattracks specializes in rubber track conversions of all types of vehicles for winter use, and the deal has been called a “perfect fit.”

Glen Brazier, founder and CEO of Mattracks, recently commemorated the transition with Loren Germundson, the former furniture store owner in Moose-laden Karlstad. Both could not be more pleased with the outcome.

Brazier says the old home furnishings store is the “absolute perfect fit” for the new Mattracks Innovation Center. “It’s on Main Street. It’s going to be a real asset to the community,” he says.

“I’m very glad that he got it,” says Germundson. “He’ll fill up the empty building on Main Street. I think he’ll do a good job. The community will be surprised by what it’s going to be.

Germundson says the building has been a furniture store since 1948, though he didn’t get involved with the furniture business until 1965 when he became a partner with Bert Trane in his store. Germundson has been the sole owner of the business since 1979. He retired in 2017 and says he enjoys his new freedom “more and more all the time.”

“It’s our 25th year this year,” says Brazier of the company he started in 1994, adding that Mattracks is the “original inventors of rubber track conversion.” His team includes his son, Matthew, who at age 11 inspired his father with a drawing of a truck with tracks instead of tires. “We’re in over 100 countries and all seven continents,” says Brazier.

Brazier has saved items both big and small from the past 25 years. “I have saved most of the unique things and I’ve got them stored away,” he notes. More would have been saved but for a wildfire in 2012 that wiped out about $1.5 million of Brazier’s property.

A visit to a warehouse east of Karlstad provides a glimpse into what the Mattracks Innovation Center will contain. Brazier notes that he was the original inventor of the deer whistle and owns 68 patents worldwide.

His collection includes a pickup truck that has the first tracks made by Mattracks and a T-1 robot that was used in the movie, “Terminator 3: Rise of the Machines,” starring Arnold Schwarzenegger.

Brazier is making plans to remodel the front and inside of the old furniture store and set it up for displays. He plans to have the center open by – what else? – Moosefest 2019.

Brazier says he is excited about purchasing the building and opening the new Innovation Center in Karlstad, a city of just 714 people in the far northwestern corner of Minnesota. Though he’s owned businesses in several other places, and still maintains an office in Shanghai, he says, “Karlstad has by far been the nicest community with the nicest people.”

Mattracks, which along with the phone company is one of the two largest employers in Karlstad, has been the recognized leader in the rubber track conversion market since its inception in 1994. It has shipped products to over 100 countries.