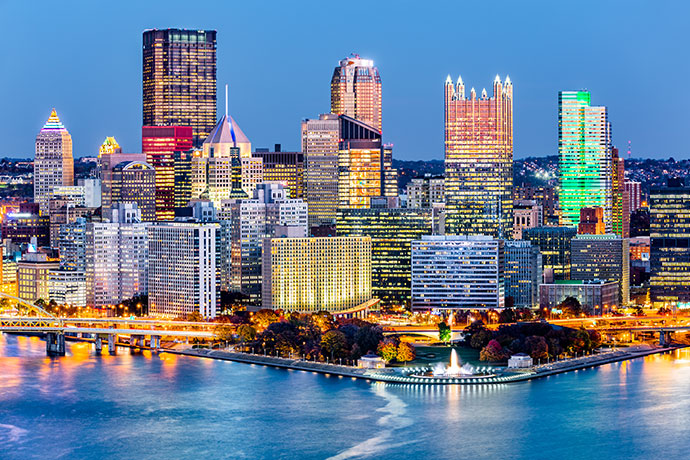 More than 110 Metro Atlanta leaders visited Pittsburgh from May 15 to May 18. The field trip was designed to give these leaders a crash course in Pittsburgh’s regional economic development success story.

On May 23, the rest of us learned just how successful the Pittsburgh region has been when the Pittsburgh Regional Alliance, an affiliate of the Allegheny Conference on Community Development, released its annual business investment scorecard.

“The technology sector has been on fire the last couple of years. This sector grew from 59 deals in 2017 to 89 last year.”
– Jim Futrell, Vice President of Market Research and Analysis, Allegheny Conference on Community Development

“This report is not a scientific compilation,” says Jim Futrell, vice president of market research and analysis at the Allegheny Conference. “It is an aggregation of business expansion announcements and infrastructure. It tends to reflect broader economic progress in the region. This year, we saw a big jump in announcements, and 2018 was the best year for employment growth in the region since 2012.”

Futrell noted that of the 340 project announcements, 257 were investment wins – “announcements that directly add headcount to a company.” Notable wins for the region included Philips Respironics at Bakery Square, a life-sciences deal that creates 100 new jobs and adds $80 million in capital investment, and Niagara Bottling, a new manufacturing plant that will create 50 new jobs and add $64 million in investment. Ellwood Quality Steels, meanwhile, announced a $60 million advanced manufacturing expansion that creates 25 new jobs, and Kenco announced a $49 million project that brings 200 new jobs in advanced manufacturing.

The 10-county Pittsburgh region secured
340
capital investment
projects in 2018, up
32%
from the
258
deals it landed in 2017.
Source: Business Investment Scorecard, Pittsburgh Regional Alliance

“Unlike 2017, there were no huge multi-billion-dollar deals in 2018,” says Futrell. “It was much more spread out last year. Overall, this was our 12th straight year of recording over a billion dollars in projects, and we have secured more than $2 billion each year since 2012.”

Among the sectors that showed the most growth in deals were manufacturing and I.T. and robotics. “The technology sector has been on fire the last couple of years,” notes Futrell. “This sector grew from 59 deals in 2017 to 89 last year. And manufacturing had its best year since 2015. Manufacturing, in fact, was up across all four measurements – projects, total jobs, new jobs and capital investment. The energy sector was up across the board as well, while business and financial services were up in all categories except total projects.”

Patty Horvatich, vice president of business investment for the conference, said the attention the Pittsburgh region received for making the list of 20 finalist locations for Amazon HQ paid dividends. “We have made more lists because of this distinction,” she says. “The media attention we’ve been receiving is something to celebrate in itself. All you have to do is look around to see the economic impact of all this development. The investments being made are truly phenomenal.”

Jenn Beer, vice president of government affairs for the conference, said the region would win more projects if the state of Pennsylvania had a more business-friendly tax climate. “We feel there is always room for improvement. We are always trying to make our competitive position stronger,” she says. “At 9.99%, we have the second highest corporate income tax rate in the U.S. That is our net corporate income tax rate. This is a real red button for our region. It has eliminated us at time from consideration. During the site location process, consultants screen a number of factors. Corporate taxes are a top-tier factor. The Tax Foundation ranks Pennsylvania 43rd in corporate taxes. We have moved tax reform to the top of our policy agenda.”

Moving forward, the Pittsburgh region will continue to measure its progress against benchmark locations around the country, says Futrell. Some 15 cities make up this list, he notes, with the five peer cities being Detroit, Cincinnati, Cleveland, Milwaukee and St. Louis. The five competitive cities are Nashville, Charlotte, Indianapolis, Philadelphia and Baltimore; and the five aspirational cities are Austin, Seattle, Denver, Boston and Minneapolis.

“We also compete against other cities for projects by sector,” he adds. “For example, we compete against Atlanta, Salt Lake City and the Research Triangle for high-tech projects.”