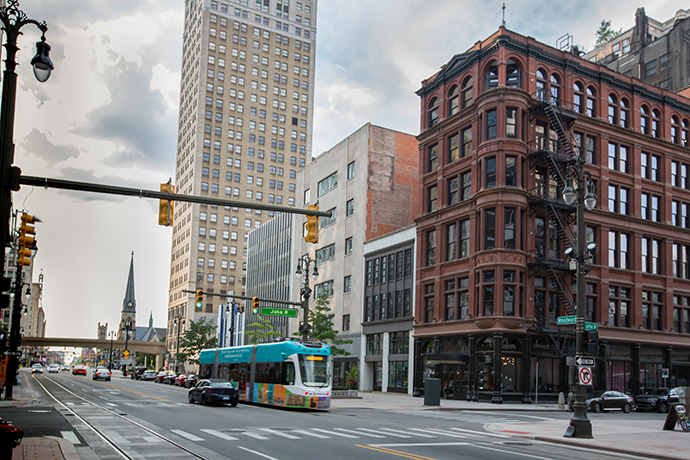 Detroit and other Midwest communities are facing challenges in the wake of GM announcing it will close 5 plants and lay off 14,500 automotive workers.
Photo: Getty Images
by RON STARNER

If the Midwest needed a wake-up call, it was delivered in a big way on Nov. 26 when General Motors announced that it would schedule five automotive plants for closure and lay off 14,500 workers – about 8 percent of GM's global labor force of 180,000.

The news came as a crushing blow to the American Heartland just four days after Thanksgiving. Factories slated to be closed include assembly plants in Detroit and Oshawa, Ontario, and Lordstown, Ohio, as well as transmission plants in Warren, Michigan, and Baltimore.

It's time for the Midwest to change, they said.

"I believe the move made by GM was a good one," said Alex Frei, a site consultant with CBRE. "Cars are becoming a commodity. There is tremendous room for consolidation."

Bob Hess of Newmark Knight Frank stressed that "after-care is more critical now than ever before. Stick with the client and make sure you deliver what you sold them."

The other site selectors agreed, noting that it is now incumbent on Midwestern communities to venture out of their comfort zone if they are to stay relevant and competitive for the new jobs and industries of the 21st century. Rather than cry over plant closings of failed products, embrace the new economy, they said.

“After-care is more critical now than ever before. Stick with the client and make sure you deliver what you sold them.”
— Bob Hess of Newmark Knight Frank

A good example is the data-driven economy, says David Liggitt of datacenterHawk. "Small, rural communities can be extremely competitive for large data center projects," he says.

When asked why the Midwest got shut out of the Amazon HQ2 sweepstakes, Hess said, “That was a 100-year decision for Amazon. They were doing footprint planning. They’re going to monetize that data. This has elevated the economic development profession. No one had ever heard of economic development before this. Chicago should be taking advantage of this.”

Frei said that "Amazon did not want to go to a city with all the negative business climate issues of Chicago and the demographic problems of Chicago, such as declining population and loss of tech talent to other markets."

Kate McEnroe of McEnroe Consulting said that "Nashville was the big winner. They can absorb 5,000 new tech jobs and move on to other things."

On widespread labor shortages, Ray Watson of US Consults said that he sees a significant increase in companies that are looking at worker requirements besides 4-year degrees.

Forsythe said the tight labor market is going to lead to a US economic slowdown very soon; and Leslie Wagner of Ginovus said, "We've had some clients moving remote workers back to the office. Some 34 percent of the workforce are millennials now, and that is going to have huge ramifications moving forward."