The Switch to ‘Yes’ 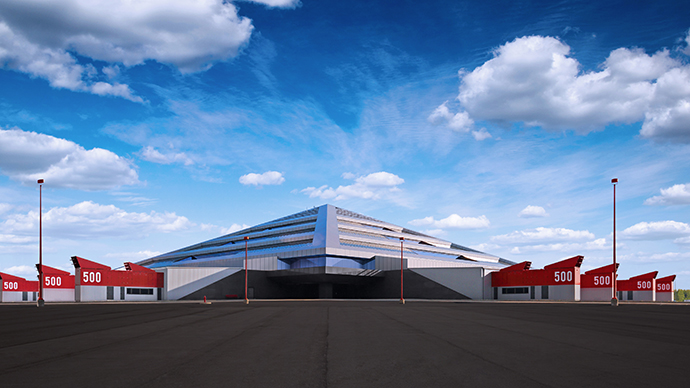 No matter the size or industry, U.S. companies are increasingly defining and exemplifying sustainability – not just for themselves, but also the customers and communities they serve.

In the tech sector, Las Vegas-based technology infrastructure corporation Switch is a tour de force. With more than 400 issued and pending patent claims for data center efficiency and a commitment to design, build and power its facilities using 100-percent renewable energy, Switch is redefining its role as a technology sustainability company.

During its visit to Grand Rapids, Mich. to see the former Steelcase headquarters in nearby Gaines Township, Switch leaders attended ArtPrize, a 19-day international art competition.

“We fell in love with the facility and the Grand Rapids community instantly,” said Adam Kramer, executive vice president of strategy, Switch. “We met immediately with (local economic development agency) The Right Place, the Grand Rapids Chamber of Commerce and Consumers Energy and asked, ‘Can you power the Pyramid with 100-percent renewable energy?’ The team answered with a ‘let’s get to yes’ attitude and committed to deliver solutions.”

“The Switch team’s depth of renewable energy knowledge proved invaluable as we worked shoulder-to-shoulder to support Switch’s energy needs,” said Mayes. “Because we committed to saying ‘yes’ as a team, the experience was among the most challenging and rewarding we’ve had as an energy provider to date.”

Along the way, Switch, Consumers Energy and state leaders saw an opportunity to enhance Michigan’s attractiveness to data center companies over the long haul.

Tax policy changes passed by Michigan lawmakers in late 2015 now exempt data center companies and their clients from paying sales or use taxes on computers, servers and other equipment for 20 years.

“Technology and the policies supporting it are constantly evolving,” said Kramer. “Switch helped develop modernized policies and programs supporting data centers in other communities we’re part of, and we were glad to help cultivate a win-win for data centers and the state of Michigan.”

With focus on consistently aggressive growth at The Pyramid Campus, Switch needed an energy provider that could keep up. Kramer says Consumers Energy has proved up to the task, and that the tone starts at the top.

“We needed a power company that would be with us—not just in the first days, weeks and months, but for the next 20-40 years—and we found it in Consumers Energy,” said Kramer. “From the beginning, Consumers Energy’s president and CEO, Patti Poppe, and her leadership team were engaged at every step. The team’s ‘let’s get to yes’ attitude starts at the top and affirmed we made the right choice of Michigan and Grand Rapids, powered by Consumers Energy.”

“Like energy providers, Switch operates 24 hours a day, seven days a week,” said Kramer. “Because we live by our 100-percent uptime guarantee, our equipment can detect as little as a millisecond of voltage sag. We’re encouraged to freely engage with Consumers Energy leaders and operations teams in true peer-to-peer conversations about energy and energy issues.”

Kramer says Consumers Energy’s “from-all-angles” approach to serving Switch’s energy needs all but ensures a bright future for the company and its customers.

“With Consumers Energy at our side, we’re tremendously confident and extremely excited about our future at the Switch PYRAMID,” said Kramer.