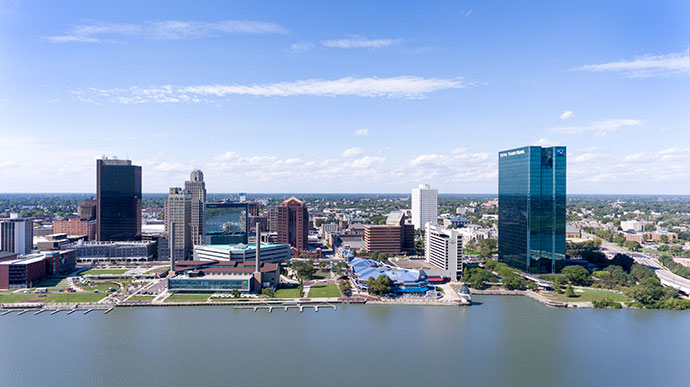 Employers needing to find workers for middle-skill jobs are increasingly turning to metro areas in the Midwestern U.S.

That was one of the principal findings of a new report authored by researchers at the Federal Reserve Banks of Philadelphia and Cleveland. In Opportunity Occupations Revisited: Exploring Employment for Sub-baccalaureate Workers Across Metro Areas and Over Time, authors Kyle Fee and Lisa Nelson of the Cleveland Fed and Keith Waldrip of the Philadelphia Fed reexamine findings from a 2015 study and offer an in-depth analysis of the largest metro areas across the country. In the report dated May 16, they find that a region’s occupational mix and cost of living play a significant role in determining their share of opportunity employment.

More than one in five jobs across America’s metro areas are defined as opportunity occupations, meaning that they pay above the national annual median wage and are accessible to workers without a bachelor’s degree. Among the 121 metros studied, the regions with the highest share of employment in opportunity occupations were Toledo (34.0% of jobs), Anchorage (31.5%) and Des Moines (30.8%). In fact, seven of the top 10 metros are located in the TrustBelt Region. They include fifth-ranked St. Louis, No. 6 Cedar Rapids (Iowa), No. 7 Cleveland, No. 8 Lexington (Kentucky), and No. 10 Kansas City.

In the areas studied, the job title with the most opportunity employees is registered nurse, at 1.4 million total workers. From 2016 to 2026, nurses are projected to be the second fastest growing profession among all opportunity occupations, trailing only plumbers, pipefitters and steamfitters in job growth. Truck drivers make up the second largest group of opportunity workers, at just over 1 million jobs, followed by bookkeepers, accountants and auditing clerks, at 581,455. Maintenance and repair workers rank fourth, with 491,285 jobs in the metros studied, followed by carpenters (457,460) and electricians (453,790).

Dean Monske, president and CEO of the Regional Growth Partnership, the economic development organization representing the greater Toledo region in Northwest Ohio, said it is not a fluke that Toledo ranks No. 1 in the country in share of opportunity jobs. “When you look at the top 25 opportunity employment occupations in these 121 American metros, we have most of them right here in Toledo and Northwest Ohio,” says Monske. “And over half of these occupations are growing faster than employment growth nationally. Plus, only a handful of those top 25 jobs have any risk of being lost due to automation.”

This is why, he notes, that Toledo can rank No. 1 in share of opportunity jobs and yet also rank No. 1 among the most automated markets in the country. “It is a testament to our workforce training and apprenticeship programs,” he notes.

Gary Thompson, executive vice president and chief operating officer of RGP, credits Ohio’s job training programs. “Ohio’s focus on career technical education is a big reason why we are so successful,” he says. “Ohio looks at how likely the skill you are teaching will be either automated or outsourced. Ohio will not teach those skills anymore in our schools.”

Monske and Thompson also credit the network of higher education institutions with providing the level of career education and training needed to bolster the middle-skilled workforce of Northwest Ohio. “We will stack our two-year programs up against anyone anywhere in the country,” says Monske. “Employers in our region have partnerships with Owens Community College, Ferris State, University of Toledo, Bowling Green State University and other schools. Every one of those credits earned by kids pursuing a technical education transfers toward a four-year degree somewhere in our region.”

“Ohio looks at how likely the skill you are teaching will be either automated or outsourced. Ohio will not teach those skills anymore in our schools.”
– Gary Thompson, EVP & COO, Regional Growth Partnership, Toledo, Ohio

Steve Robinson, president of Owens Community College in Toledo, believes in the value of community college education so much that he started a national movement via a social media campaign -- #EndCCStigma – to tackle the issue head-on.

“Intellectually, a lot of people understand our value proposition, and we’ve made a lot of traction, but we need to get out from a bunch of outdated assumptions about community colleges,” Robinson told Insider Higher Ed for an article earlier this year. “It hit me that this is a stigma issue. I’m a direct person, so I’m trying to amplify what people have said about how inaccurate the stigma is.”

Monske says he appreciates Robinson’s candor and applauds any effort that encourages more students to pursue meaningful, good-paying careers in technical fields. “This has become quite the national campaign,” says Monske.

Thompson adds that RGP will put its money where its mouth is next month when it entertains about a dozen site consultants on a fam tour of Toledo and surrounding Northwest Ohio. “Much of our discussion with them will be about institutions where these workers are trained,” he says. “The consultants will have one-on-one discussions with five college presidents here and with executives at British Petroleum, Dana Corp. and other companies that are located here. The consultants will see that we are ready to change on a moment’s notice and adapt our worker training to whatever our employers need on the factory floor.”

Plus, he adds, “you can get to work in 15 minutes or less here. As the data indicate, it is very rewarding to live and work here.”