Why the Next Silicon Valley Will Be Borderless 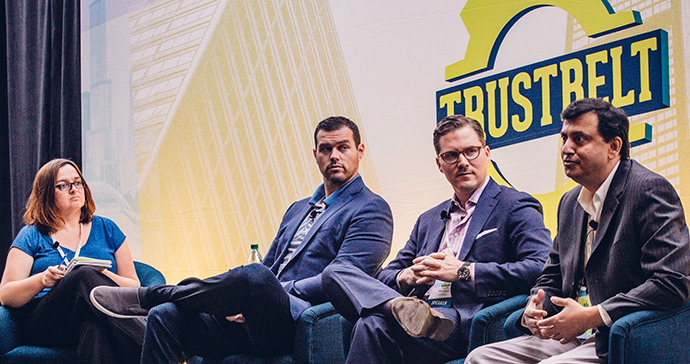 From left are Maren Lesche of Startup Colors; Matt Knight of Shadow Ventures; Chris Thomas of Detroit Mobility Lab; and Hassan Syed of Bir Ventures USA Ltd. They were speaking on a panel on entrepreneurship at the TrustBelt Corporates & Consultants Forum in Detroit on Nov. 7. The event was organized by Conway Inc., publisher of Site Selection magazine.
photo by Shay La’Vee
by RON STARNER

Rather than try to build the next Silicon Valley, why don't you try to create something better?

That was the challenge issued by Hassan Syed, CEO of Bir Ventures USA Ltd., at the TrustBelt Corporates & Consultants Forum in Detroit on Nov. 7.

While many corporate leaders and economic developers scramble to recreate the conditions under which the original Silicon Valley in California flourished, a far better approach is to scrap that plan and build something that packs more authenticity and more staying power for the 21st century, says Syed.

"The next Silicon Valley will be borderless," he says. "The question we must ask ourselves is, how do we create a competitive advantage?"

Syed, whose firm is based in the Twin Cities in Minnesota, was joined by a panel of startup economy experts at the two-day conference in downtown Detroit in early November. Also sharing their expertise were Maren Lesche, founder of Startup Colors in Berlin; Matt Knight, principal of Shadow Ventures in Atlanta; and Chris Thomas, co-founder and president of Detroit Mobility Lab.

“There is too much focus on retention of large companies and not enough focus on creating and nurturing startups. This must change.”
— Hassan Syed, CEO, Bir Ventures USA Ltd.

While the current version of Silicon Valley experiences an erosion of public trust, thanks to mounting scandals at Facebook, Google and other tech giants, Syed says that trust must be the essential building block of any competitive economy moving forward.

"Trust is the condition under which people share ideas," he says. "That's how you build a successful ecosystem."

Political and geographic boundaries are becoming less relevant by the day, he adds, noting that "we live in a connected world. It does not matter where anyone lives. I have lived in five countries and worked in 10 different cities. I have traveled to 60 countries. We should not be scared of people moving. Clusters of industry will be less important in the future; money will always find its way to where it needs to be."

Picking up on that theme, Knight says that Silicon Valley must first get its own house in order before attempting to replicate itself elsewhere. "Silicon Valley is doing a poor job at affordable housing," he says. "They are losing tech talent. They are not retaining talent."

Syed says that's a natural part of the progression of mature ecosystems. "Every company has a life that ends at some point," he says. "There is too much focus on retention of large companies and not enough focus on creating and nurturing startups. This must change."

Lesche noted that Berlin "is very successful at growing startups. Why? There are no major industries there. Where there is no need to strive for success, entrepreneurship dies."

Thomas said that entrepreneurs and economic developers should take nothing for granted. "Detroit is positioned to win in mobility, but it's not our birthright," he says. "We don't have the talent to win now, but we do have great partners in the Michigan Economic Development Corp., Detroit Economic Growth Corp., the Mayor's Office, PlanetM and others. We have huge balance sheets, and we are good Midwesterners. That means we don't have big egos."

Syed noted that "people have to take ownership of building their own ecosystems and industries. Everyone is looking for a silver bullet, but there is none."