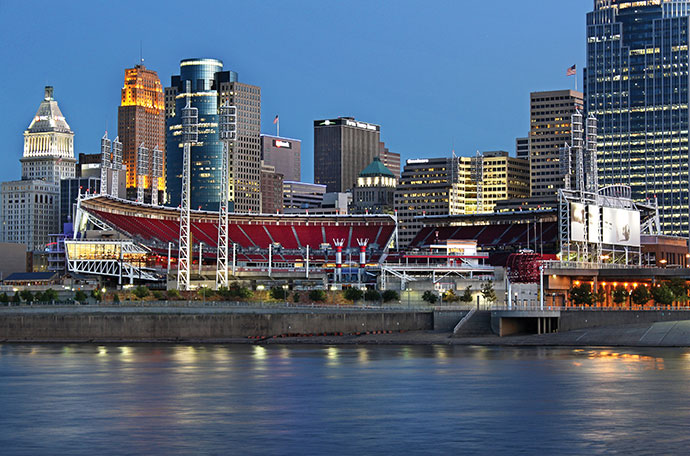 Skyline of Cincinnati, Ohio – the No. 1-ranked city for female homebuyers.
Photo courtesy of REDI Cincinnati
by RON STARNER

Female entrepreneurship is making solid gains across the country, with a notable surge in women-led startups taking place in the Midwest, according to a new study by FitSmallBusiness.com.

The study ranked each state for its desirability and outlook for female entrepreneurs. The following overall criteria were considered: general business climate and opportunity (25 percent); number of female-owned businesses (25 percent); economic and financial health (25 percent); and safety and well-being for women (25 percent).

A University of New Hampshire study found that the number of female entrepreneurs is growing steadily across the country.

The report comes at a time when women-owned startups still face significant social and economic challenges, a fact that results in far more male-launched businesses than female-led startups. A Biz2Credit study found recently, for example, that women who apply for business loans typically receive 45 percent less money than their male counterparts. And Fortune magazine reports that 94 percent of venture capital firms are led by men.

Despite these ominous signals, some silver linings may be on the horizon. A University of New Hampshire study found that the number of female entrepreneurs is growing steadily across the country. Some 23 percent of entrepreneurs seeking angel investing were women in 2018, up from 19 percent in 2014; and since 1972, women-owned businesses in the U.S. have grown by 3,000 percent.

Woman gaining increased access to capital is being felt in other parts of the economy as well, with the TrustBelt showing some remarkable progress. According to SetSchedule’s latest housing report, five of the top 10 cities for female homebuyers in America are in the Midwest, including No. 1 Cincinnati and No. 2 Kansas City. Milwaukee checks in at No. 6, while Minneapolis is No. 8 and Chicago is No. 10.

SetSchedule also found that roughly 18 percent of all homebuyers in 2017 were single females, compared to only 7 percent being single men.

The study was released as part of National Women’s History Month, which has produced other reports showing mixed results. For example, a new report by Korn Ferry and The Conference Board shows that the majority of human resources executives (66 percent) say gender inequity in company leadership is a significant issue.

According to the survey, gender inequity is significantly higher at the top levels within organizations. While almost half (48.8 percent) of individual contributors are women, that percentage falls to just 22 percent at the senior vice president and C-suite levels.