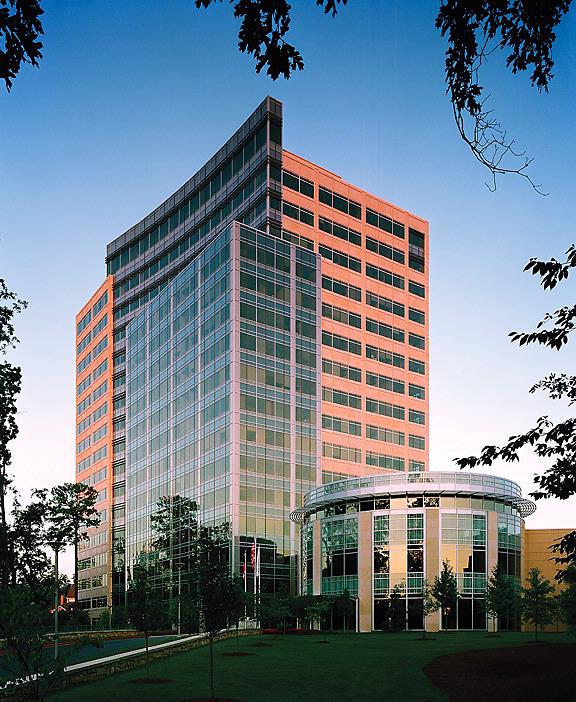 Construction is scheduled to begin in 2010 with occupancy expected in 2012 at a 600,000-sq.-ft. (55,740-sq.-m.) technology department building on the headquarters campus of Cox Enterprises (pictured) in the Atlanta metro community of Sandy Springs.
by ADAM BRUNS
A

The new headquarters complex will be built close to Cox Enterprises' 16-story headquarters, completed in 2001, and located on a 28.8-acre (11.7-hectare) tract of land known as Central Park, just north of I-285 and Hammond Drive in Sandy Springs and Fulton County. Three MARTA rapid-transit stations in the area serve Cox employees with door-to-door shuttle service provided by the company. Cox Communications' main facility located nearby will continue to serve as headquarters non-technology department employees.

CB Richard Ellis is Cox's strategic real estate planning partner. The project will be developed by Atlanta's Cousins Properties, Inc. Cox also has engaged Bob Hughes, a principal with HGOR, a planning and architecture firm, and Duda/Paine Architects, to consult on land use for the company's Central Park master plan and construction of new facilities.

Green in the Desert

According to CTIA-The Wireless Association, as of June 2009, wireless communications had 89-percent penetration across the U.S. population, and more than 20 percent of households were wireless only. Annualized incremental capital investment in the industry had more than doubled since June 2000 to $19.5 billion. And text messages had multiplied from 57.2 billion as recently as 2005 to 1.36 trillion. Total service provider employment among CTIA members responding to a survey had grown from 225,162 in June 2005 to 261,453 in June 2009, with only a slight drop-off between 2008 and 2009.

When fully operational in early 2011, the 108,000-sq.-ft. (10,033-sq.-m.) computer data and network center Cox is opening in Phoenix will employ approximately 50 and serve each of Cox's major subsidiaries. "Digital growth is a common denominator for each of Cox's companies — from online vehicle auctions and classifieds to mobile news and entertainment applications to digital consumer reviews and coupons," said Greg Morrison, vice president and chief information officer, Cox Enterprises.

The design supplements Cox's other local energy conservation efforts: an existing solar installation in northern Phoenix and green call center program as part of Cox Conserves, the company's national and regional sustainability program, which aims to reduce the company's greenhouse gas emissions by 20 percent by 2017.

The company’s new data and networking center in Phoenix, Ariz., is projected to come online in early 2011.