hirsty areas of the world are putting up major desalination plants. Pinpointing which one is the world's largest is difficult because the plants keep getting larger. The current facility claiming to be world's largest reverse-osmosis desalination plant was officially opened in Hadera, Israel, in May. H2ID, a joint venture of Israel's IDE Technologies and Housing & Construction Group, will operate the US$425-million plant (pictured above), which will have the ability to produce 127 million cubic meters (nearly 4.5 billion cu. ft., or 33.6 billion gallons) of water per year, which equals about 20 percent of the annual household consumption in Israel.

"The success of the mega-desalination plant concept has ushered in a whole new era of plentiful, affordable water for a world facing severe water challenges," said Avshalom Felber, CEO of IDE Technologies.

IDE Technologies is a global Israeli company which is a pioneer and leader in the field of water technology. IDE has constructed 400 desalination plants of various sizes and technologies in 40 countries — some of them the largest of their type in the world. IDE is known for technological breakthroughs in the fields of thermal and membrane desalination, and is also active in other fields, including industrial cooling, the production of artificial snow, industrial evaporators and solutions for the re-use of sewage water.

IDE also has the contract for the Sorek desalination plant, which will be much larger than Hadera. The $525-million project will be built south of Tel Aviv and will eventually expand to produce 300 cubic meters (10.6 billion cu. ft. or 79.3 billion gallons) of water per year.

Australia's largest desalination facility, the $3.1-billion Victoria Desalination Plant, will be in the Wonthaggi region, and supply up to 150 billion liters (39.6 billion gallons) of water a year to Melbourne and surrounding areas. The project includes an 84-km. (52-mile) underground pipeline. Construction of the plant began in September 2009, and it is on schedule to deliver water by the end of 2011.

India opened its largest desalination plant in Chennai in July. The facility will produce 100 million liters of water per day, which equates to 9.6 billion gallons a year.

Robotics Not So Robust in 2009

nnual statistics released by the International Federation of Robotics indicate shipments of industrial robots worldwide slumped by 45 percent in 2009, compared to 2008, which was one of the most successful years for the sector. However, that dismal news is somewhat offset by strong first quarter 2010 sales, which IFR says skyrocketed by more than 50 percent compared to the same quarter in 2009.

"This is the start of a recovery which may result in annual worldwide sales of almost 100,000 industrial robots by 2013, maybe reaching the level of 2008 even earlier, one of the most successful years of the robotics industry." said Åke Lindqvist, IFR President.

The worldwide financial and economic crisis hit the robotics industry hard in 2009. In all regions robot sales slumped in a range between 41 percent and 48 percent compared to 2008. The three largest robot markets were dramatically down. Japan experienced a decrease of 57 percent compared to 2008. About 14,000 industrial robots were sold, less than half of the average number of units sold yearly between 2005 and 2008 (about 37,000 units).

The other big robot markets, Germany and North America, fell by 44 percent and 48 percent, respectively. These three markets represented 50 percent of the annual worldwide robot sales in 2009.

China, the fastest-growing market up to 2008, bought 31 percent fewer robots in 2009 compared to 2008. Also, robot shipments to ASEAN countries, India, the Central and Eastern European countries and Brazil were down.

The IFR says car manufacturers consolidated production capacities globally and restructured their business, heavily affecting automotive parts suppliers. The rubber and plastics industry, the electrical/electronics industry as well as the metal and machinery industry drastically reduced their investments in robotics. Danish firm Widex has taken green infrastructure to a new level with its new headquarters.
D

anish hearing-aid specialist Widex is drawing rave reviews for its new environmentally friendly headquarters which opened in Allerød, north of Copenhagen, earlier this year. The building will employ geothermal, wind and solar power.

The new headquarters employs a special geothermal system — the first of its kind in Denmark. The system stores excess heat from the building in a groundwater reservoir. When needed in the winter, this heat can be used for heating the building. The system is effective, reducing CO2 emissions by 70 percent compared to traditional heating systems. This is the equivalent of approximately 700 tons of CO2 a year or the emissions from 250 gas-heated houses.

Widex also completed installation this summer of a 100-m.-high (328-ft.) wind turbine which is expected to produce 3.4 million KW of electricity annually. It will replace approximately 2,000 tons of CO2, making Widex a carbon-neutral company. The excess power delivered, which equals the electricity consumption of 150 houses, will be delivered to the electricity grid.

Other green measures include the collection of rainwater to be used for flushing toilets, while surplus rainwater, together with water from roads and ditches, is fed into a stream from where it seeps into the groundwater. This helps preserve the groundwater reservoir. Furthermore, the building is equipped with a total of 20,000 solar

WinWinD has greatly increased its manufacturing capacity with its new plant in Hamina, Finland.
F

"The new Hamina plant and the Chennai factory that started last year in India are both essential to our growth strategy," said Ilkka Hakala, WinWinD's CEO. "Together, they will raise our production capacity to a level that enables us to answer growing customer needs all over the world. We will expand our services to completely new market areas and grow into a truly global company during the next few years. The state-of-the-art technological properties of our products will make this possible."

The wind turbines developed by WinWinD are based on a process where electricity is produced in a unique, hybrid concept power unit. The objective is efficiency, quality, long life and easy maintenance. The company also operates a blade and turbine plant in Vengal, India. McLaren has a rapid construction schedule for its new manufacturing plant in Woking, England.
C

onstruction of McLaren Automotive's $62-million McLaren Production Centre (MPC) in Woking, England, is proceeding on schedule. The company expects to complete the 344,640-sq.-ft. (32,000-sq.-m.) facility by next spring and begin producing the first MP4-12C high-performance sports cars by spring 2011.

"The MPC program is progressing as successfully as our other projects at McLaren," said Alan Foster, operations director at McLaren Automotive. "The great weather we have had this spring, plus the attention to detail we embedded in the project from day one with our architects, surveyors, and contractors is paying dividends as the project continues to proceed ahead of schedule." 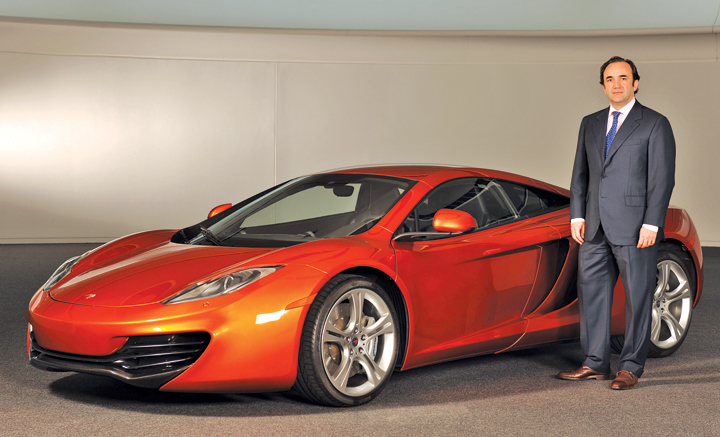