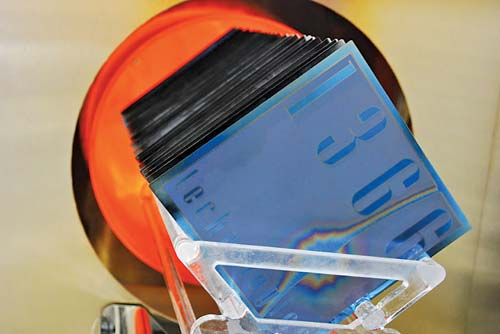 1366’s Self Aligned Cell is seen in a solar simulator, which measures cell efficiency.
Photo courtesy of 1366 Technologies
by JOHN W. McCURRY
T 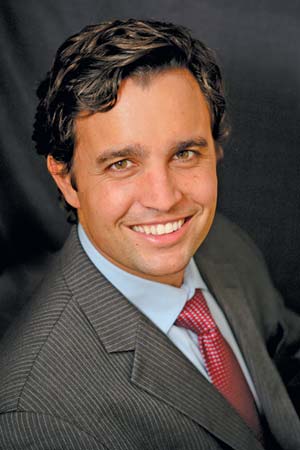 he race is on among solar technology companies to come up with cheaper, more efficient ways to harness the sun’s energy. One such company is 1366 Technologies, which recently snared a conditional commitment from the U.S. Dept. of Energy for a US$150-million loan guarantee. 1366, headquartered in Lexington, Mass., says it has achieved breakthroughs in silicon cell architecture with a lean manufacturing process that will allow it to make cost-effective and commercially viable high-efficiency solar cells. 1366’s technology was developed by a team of scientists lead by MIT professor and photovoltaic industry expert Dr. Emanuel Sachs.

The DOE loan will allow the company to build its first full-scale manufacturing facility at a yet-to-be-determined site in Massachusetts. Plans call for that plant, which will be about 40,000 sq. ft. (3,716 sq. m.), to produce 20 MW annually and employ 100, and to be operational by 2013. Once that plant goes online, 1366 has plans for a much larger facility with 1,000-MW capacity and 300 jobs to be built at another to-be-determined site somewhere in the U.S. The loan complements more than $40 million the company has raised in venture financing.

“It gives us a chance to scale our technology quickly,” says Craig Lund, 1366’s vice president of business development. “Our first facility gets us to the scale where we are producing in volume. Then the larger facility will establish us as a meaningful manufacturer. We’ve raised our financing and we are off to the races. We’ve been at it for three and a half years and we are standing at the cusp.”

Lund says most of 1366’s production will be exported to customers in Asia and Europe. 1366 believes its innovative process could reduce manufacturing costs of the wafers by approximately 50 percent.

“This project is a game-changer that could dramatically lower the cost of photovoltaic solar cells,” said U.S. Energy Secretary Steven Chu when he announced the loan in June. “It is exactly the kind of innovation that puts America at the forefront of the global clean energy race. As global demand for solar cells increases, this kind of technology will help the U.S. increase its market share and be more competitive with other countries such as China, which currently accounts for 60 percent of the world supply of multicrystalline wafers.”

“This facility opening signifies our transition from a high-tech startup to a major player in the fast-growing e-commerce fulfillment market,” said Mick Mountz, founder and CEO of Kiva Systems.

Another thriving tech firm is voice-over-IP specialist Acme Packet, which boosted its headquarters space by 75 percent in Bedford with a new lease agreement. The firm now has 262,000 sq. ft. (24,350 sq. m.). Acme expects to hire more than 180 employees in Massachusetts.

“Acme Packet is helping to power exciting advancements in communications technology,” said Acme Packet president and CEO Andy Ory. “By taking this additional space, we’re well positioned to grow the company and to continue to attract and retain highly skilled employees — those who already live in Massachusetts and those who are coming from outside the state to join our company. Our decision to locate our company in Massachusetts and make it our base of operations for our continued growth is intentional and strategic. Attracting and retaining skilled employees continues to be an essential element of our success, and Massachusetts offers an unrivaled pool of talent.”

All of Acme Packet’s research and development, as well as the final test and assembly steps in its manufacturing processes, take place at its Bedford facility. Acme Packet was founded in Massachusetts in 2000. Since then, the company has established itself as one of the state’s major success stories. It was named “2010 Public Company of the Year” by the Massachusetts Technology Leadership Council.

Goodrich Corp., a supplier of aerospace and defense systems, has leased nearly 185,000 sq. ft. (17,187 sq. m.) of space at Westford Technology Park in Westford. The company moved from nearby Chelmsford.

“Over the next three years we expect to employ an additional 200 skilled personnel from across the state at this site, which will specialize in the development and manufacture of sensors for our growing intelligence, surveillance and reconnaissance [ISR] business,” stated Tom Bergeron, president of Goodrich’s ISR Systems business.

Northern Ireland-based TotalMobile announced in August that it would add 100 jobs over the next three years and increase space at its Westborough facility. TotalMobile provides software to a wide range of state and municipal government customers and private industry organizations, including prepackaged mobile applications platforms that allow field workers to capture information in real-time and relay information to back-office systems, reducing travel costs and time spent on processing paperwork. TotalMobile will add employees in the areas of business development, technology solutions support and technology project management.

“We believe the opportunity for TotalMobile in North America is huge and the business here can easily grow to the current size of the U.K. business,” said Colin Reid, CEO of Consilium, the parent company of TotalMobile, when the announcement was made. “That would mean between 75 and 100 staff. We would like to especially thank the efforts of Invest Northern Ireland. INI was an effective partner providing excellent assistance as TotalMobile entered the North American market. Their experts in Belfast and Boston were a definite asset to our team during our initial set-up and now with our expansion process.”