Steal a glance into the future via these snapshots of evolving science parks. 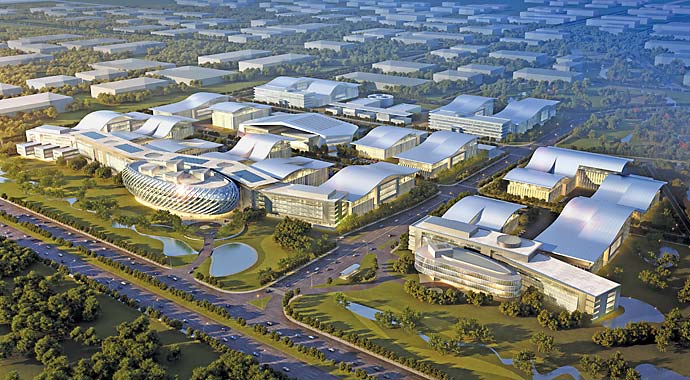 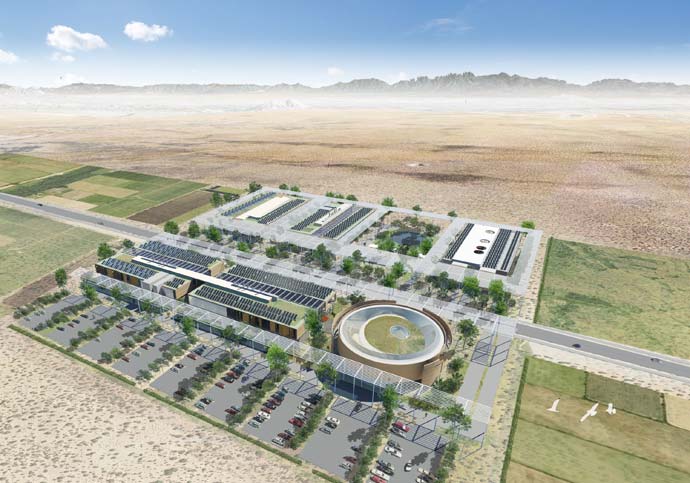 The Center for Innovation, Testing & Evaluation, or “CITE,” is a 20-square-mile (52-sq.-km.) project from Pegasus Global Holdings destined for an area called the EnergyPlex near Hobbs, N.M. Though portrayed as a “ghost town” in many press accounts, the development, announced this spring, could truly be the ultimate science park, providing “the opportunity for end-to-end testing, evaluation and demonstration of new intelligent and green technologies and innovations emerging from the world’s public laboratories, universities, and the private sector,” said Pegasus. Visit SiteSelection.com in July for the full story about “Project Sandbox.
Image courtesy of CITE

ome are forward-leaning. Some are futuristic or visionary. Some are private, others public. Some exist and thrive already. Others look pretty on paper so far. A few are outright mind-bogglers.

What a sampling of science park activity reveals most of all is a hunger for environments conducive to innovation.

How else to describe the plans by China Resources Medication Group Ltd. to fill a 178-acre (72-hectare) greenfield site in the Daxing district of Beijing with integrated R&D and manufacturing for traditional Chinese medicines, pharmaceuticals, bio-pharmaceuticals and medical diagnostic equipment, as well as a technology innovation center? Or fellow Chinese firm Yunnan Baiyao's relocation of its campus to the suburb of Kunming, with a master plan that incorporates 40.5 million sq. ft. (3.7 million sq. m.) of residential, industrial, research, and manufacturing areas while engaging the existing topography? Or an entire "ghost town" in New Mexico to be populated by companies seeking to test smart grid and other technologies in a real-world environment?

Steven J. Riojas was recently named director of the Science + Technology program for San Francisco-based HDR Architecture, Inc. A senior vice president with the firm, Riojas has devoted his 32-year career to the design of facilities that foster the advancement of science and technology for academic institutions, public and private corporate clients, and numerous federal agencies. His work has taken him from the automotive industry corridors of his native Michigan to such fields as composites and nanotech, working with the giants of the oil industry and giant national laboratories with equal aplomb.

As he expressed it in announcing his new position earlier this year, "our clients look to us to be transformative, innovative, creative, and forward-thinking. Our work promotes improvements to and the extension of life, work that leaves a lasting and positive impression for generations that follow." In an interview, he sounds as much like a science park leader as he does a designer of them:

"My job is to provide an environment that stimulates high brain-powered people, and provide them the environment and resources to do what they enjoy doing around the globe."

Those 28 laboratory planners program and plan research facilities for the largest science and technology program within an architecture firm found anywhere in the world. Among the hot-button issues for them is so-called "big data."

"What we're seeing, in many different places, is that the data being generated coming out of research is just enormous," says Riojas. "With cloud computing, and what I call critical environments, it's growing exponentially, with clients having to re-evaluate how to handle all this data. Do you build your own, lease or share?"

Concurrently there's a sense that research and science parks, once thought of as sets of individual containers, now are just a larger version of a building.

"There's a network of different functions going on, and a need to be interconnected for the leveraging of the amenities that are there that everyone needs and not everyone wants to replicate. In many ways it's an extrapolation of an interdisciplinary research building."

The most dramatic illustration is in big pharma, a field HDR has worked in for many years.

"Traditionally they've been in their own protective bunkers, but we're seeing a relaxation of that," says Riojas, most strikingly in the area of translational health, or the merging of healthcare environments with science and technology development spaces.

"Historically it's been strongly firewalled between research and healthcare," he says, but projects such as the MD Anderson Cancer Center expansion in Houston now involve co-locating departments and entities that in the past have not worked together, with basic research, clinics and even small-scale manufacturing all in one place. All in a quest to get knowledge developed and commercialized as fast as possible, leveraging brainpower for market power.

Riojas says his firm's master planning for Beijing International Medical Center is a case in point. Half the size of Manhattan, the planned campus will host eight hospitals in all across a wide range of specialty care, as well as university and manufacturing areas. "It's just mind-blowing," he says. Another major project is under way at Nanjing University in Shanghai. Corporate clients are scaling up too: Witness China Resources' plan. Riojas says China is on "an incredible push."

His colleague Gary Nagamori, a managing principal at the firm and one of a brain-trust of thought leaders Riojas has dubbed "the futurists," says the scale of Chinese projects is what's most notable.

"When the Chinese are offering you an airport, rail, large logistical transport and five or six mega-hospitals on site, in some ways they offer a complete package for translational medicine," says Nagamori. The existence of dirt-cheap leases tops it all off and is hard to compete against, especially when combined with an increasingly sophisticated talent base.

"Look at the educated labor they provide," he says. "They're going to surpass us in the near future. The number of graduates they're cranking out with PhDs is trending to be greater than ours. They've made remarkable advancements in scale and quality. Look at all the corporations taking their research to China, and the number of partnerships with industry. It's tremendous fuel for those parks in China. The critical mass is really there."

During the past five years, SIP says it has attracted over 2,500 nanotech related experts, entrepreneurs and engineers, and incubated and supported over 100 nanotech related companies both from China and overseas. "Suzhou intends to attract over 200 nanotech companies from all over the world and 10,000 nanotech experts within the next five years to make Suzhou the most global and innovative nanotech hub in China by 2015," says a presentation from SIP.

May You Live in Interesting Times

Despite funding challenges in the university environment in particular, Riojas says his team continues to see top-tier institutions pressing forward with projects. He cites two at MIT, as well as projects at USC, UCLA and Harvard.

Asked which sort of team members are usually assembled on the client's side of the table, HDR's Riojas says at user meetings, "in many cases nowadays, we are considered the experts and develop the program," he says. "There is increasing expectation put on us. In part because a lot of these countries around the world look at the U.S. as the traditional big thinkers and innovators in R&D."

Indeed, the "Global Innovation Barometer" released by GE earlier this year found the U.S. still in the pre-eminent position where perception of innovation was concerned. Based on a survey of 3,000 senior business executives in 22 countries, markets with the perceived political and social environment for innovation delivered higher GDP growth (5.19 percent average) than those markets where business feels anxious or threatened by policies (2.32 percent average).

Executives in Israel, United Arab Emirates, Sweden and Singapore reported the highest levels of satisfaction with their country's innovation environment, while Japan, Russia, Poland and France reported the lowest satisfaction levels. "Interestingly," said GE in releasing the report, "despite Japan's negative view of its own country's innovation policy environment, it was again ranked by global business leaders as the third most innovative in the world, right after the U.S. and Germany, and ahead of China."

Riojas says because of the rapid pace of change, science parks these days can be thought of as highly flexible and adaptable containers for research. "We design them today for a vision, and by the time they're occupied they will have changed many times."

So will the design of the global networks behind those parks, which increasingly involve more transoceanic partnering between schools and companies, as well as more global outreach by universities seeking to develop campuses abroad.

Riojas calls it an interesting time in globalization, as various public- and private-sector organizations devote more brainpower and more funding toward decreasing that developmental time for new ideas. The time will only decrease as more walls come tumbling down.

"In the past there's been this concern about preserving one's intellectual property," he says. This generation, empowered by social media, "sees the sharing of ideas as a benefit, not a threat. I see it in my own kids. Corporations and institutions are seeing there's greater benefit to partnering than working separately and keeping things close to the vest."

Such openness factors into the firm's ongoing study of a big pharma company's entire global portfolio, as well as another company looking to site multiple facilities around the world.

"One thing we're finding with this first study is the way people work is changing," he says. "At any one time, 70 percent of the offices are empty. People are increasingly mobile — working from home, traveling, collaborating from elsewhere. So the amount of space required is reducing and the type of space required is changing, with more flexibility and more hoteling space. It's not a new idea for offices, but it is new for laboratories. So we're evaluating ways to make labs flexible. And we're developing prototypes for a WalMart-type warehouse where you can reassemble and completely reconfigure the thing over night." 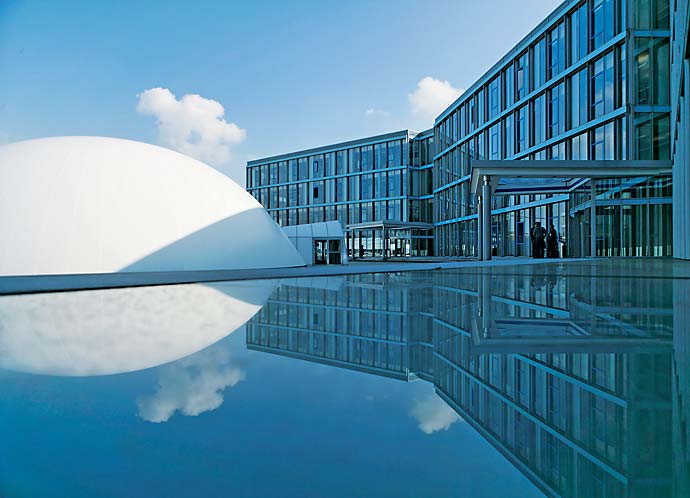 Among the 80 or so products Festo exhibited at the recent Hanover Fair 2012 were such concepts as the bionic ExoHand, demonstrated at the company’s technology center and headquarters in Esslingen by Dr. Eberhard Veit (right), chairman of the Management Board of Festo AG.

Germany's Festo Group, an automation solutions and robotics company, posted its highest-ever sales figures in FY 2011 at €2.1 billion (US$2.6 billion). The company also provides energy-efficient solutions for green manufacturing and eco-friendly water/waste water solutions for towns and cities. And its Didactic division teaches industrial skills to workers in fast-growing economies, including Germany's.

For the most recent fiscal year, Festo invested approximately €125 million (US$157 million) in expanding its global development, manufacturing and logistics network, with half of that total going to facilities in Germany. Indeed, even as Festo focuses on Asian growth in 2012, its innovation base remains at its home in Esslingen, where the company is expanding.

"We want our high-tech site in Esslingen to provide the central functions which will support our targeted global growth," said Dr. Eberhard Veit, chairman of the Management Board of Festo AG, earlier this year. "New work environments will be created in the future planned spaces, especially for our growing and complex project business. The new facilities will also enable additional laboratory space and more room for us to intensify our cooperation with universities and higher education institutes in the field of high-tech clusters and joint research projects … In the coming years, Germany in particular will form the backbone for Europe's engineering industry."