Can ‘Airport Cities’
Close the Deal?

Research reveals what companies expect from their
next location, whether it’s near an airport or not. 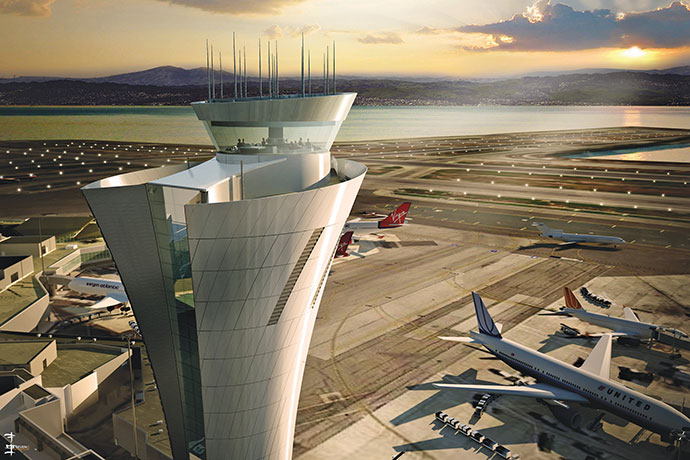 A rendering of the new San Francisco International Airport control tower from Fentress Architects. The tower is a part of a capital improvement plan unveiled by SFO in May 2013.
Rendering courtesy of Fentress Architecture ©
by MIRJAM WIEDEMANN
A

irport Cities are developing rapidly into office locations for non-aviation related companies. As more and more airports worldwide are engaging in real estate development, the question arises how companies choose their location in regard to airport city and aerotropolis developments, and what could be a competitive advantage for such a development.

At present, 20 airport cities are operational worldwide, and 13 more are under development. Twenty-five aerotropolises — urban developments with an airport city at their core — are operational, and a further 26 are under development, according to a list maintained at www.aerotropolis.com. As airports develop their land for non-aviation related activities, the question, “Who would be the future tenants of these airport cities?” becomes more and more pressing. Research in 2012 in Germany and the United Arab Emirates of non-aviation related companies sheds some light on the competitive advantages of airport cities relative to other locations and on competition between airport city locations.

In the past, it was assumed that the competitive advantage of airport cities as office locations would be air connectivity and proximity to the airport terminal. But while air service was widely acknowledged as an advantage for the location with more than 70 percent of the interviewed companies stating that airports are an important factor for future location decisions, companies do not see a location in direct proximity to the airport as a decisive location criterion. Rather, air connectivity in general was desired, and companies consider a travel time up to 30 minutes to the airport adequate. Hub airports were seen as slightly more advantageous than regional or smaller airports. Therefore, commercial development around hubs, or at least bigger airports with better air connectivity, should have an easier time attracting facilities.

Interestingly, companies emphasized not only the importance of connectivity, but of regional connectivity and accessibility by all modes of transport. Particularly in Germany, a main train station in close proximity and availability of public transport was seen as beneficial to potential office space occupiers, which has positive implications for sustainable airport city development.

After connectivity, non-aviation related companies stressed the importance of business agglomeration, either in terms of proximity to a specialized business cluster or to a more generalized commercial environment as being important to their choice of location. Proximity to a specialized industry cluster delivers networking advantages and a more efficient supply chain, and amenities are more likely to fit their needs in areas with a concentration of like-minded businesses. Advantages of a more generalized commercial environment are more diverse. But research interviewees cited several, including ease of facilitating and maintaining business connections, marketing by branding on building facades and other measures, and a higher probability of attracting walk-in clients.

Regional circumstances account for certain location criteria. For example, in the United Arab Emirates, business parks were a preferred location, as they are often located in free economic zones with special administrative and regulatory advantages. Foreign companies gravitate to special economic zones where 100 percent foreign ownership is permitted where it is not in the rest of the country.

Firms naturally favor areas that fit their needs, which are both general and specific. Besides transport infrastructure (roads, parking facilities, trains, buses and taxis), companies want to be in areas with such amenities as dining, recreational centers, medical facilities and retail for day-to-day needs (ATMs, supermarkets, convenience stores and dry cleaners). These are important findings. Companies participating in the research indicated they would not move to airport city locations that are far away from the city center or do not offer certain amenities. They would rather locate in the central business district than in an isolated business park near the airport. Therefore, it is important for airports to understand these needs and to develop their surplus land into airport cities that offer similar conveniences and amenities to the city centers.

As more and more airport cities emerge worldwide, giving capital investors more location options, airport administrators must be more aware of the needs of the tenants of their future commercial developments. Air connectivity is increasingly insufficient motivation to attract companies to new airport property developments. In addition to business, cultural and regional factors, connectivity and accessibility are key to more location decisions. A concentration of other businesses in the airport city is important to attracting other tenants. But this can be especially challenging for greenfield developments as the airport needs to attract a critical mass of tenants to the development site at the same time. The right transportation infrastructure and amenities are critical to filling the new commercial developments at airport cities and to gaining a competitive advantage over similar developments and real estate sites in urban centers. For those areas not already working on transforming their airport economic engines into airport cities (perhaps aerotropolises later) or those that see the need to reconsider their commercial master planning, a thorough analysis of possible and logical future tenants — and their needs — is a good place to start.

Mirjam Wiedemann is the owner, founder and managing director of WiedemannConsultants; a consultancy that specializes in strategic planning for Airport Cities and economic or rather commercial development of Airport Cities and Aerotropoli. The article summarizes some of the findings of Mirjam’s research undertaken for her PhD thesis. The PhD research got funding from Erich-Becker-Stiftung and Southern Cross University. www.WiedemannConsultants.com