How a home-grown coffee enterprise can compete in Topeka
with high-end roasters on the coasts. 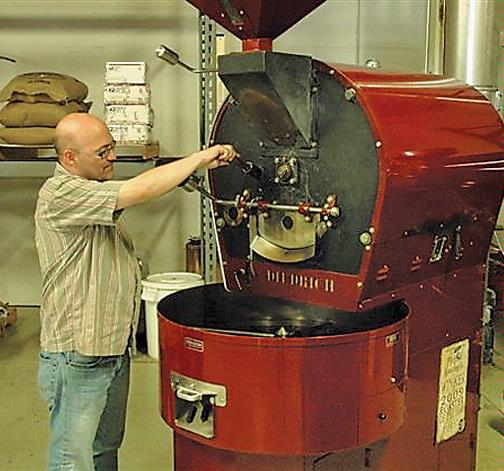 ansas and its capital city, Topeka, are showing up on some lists that plenty of bigger cities and states wish they were on. In recent months, Kansas was named a Top 10 Competitive State by Site Selection (May 2010 issue) and a Top 10 Pro-Business State by Park Ridge, Ill.-based Pollina Corporate Real Estate. "Kansas (7th) made a strong move up the rankings of the Pollina Top 10 Pro-Business States list in 2010 from its 10th place slot in 2009," says Brent Pollina, vice president. "Its strong 8th place ranking for Stage I, Labor, Taxes & Other Factors, combined with their 8th place rank under Stage II, Incentives and Economic Development Agency Factors, illustrates a well-rounded approach to economic development. This has moved Kansas to its highest position ever on the Pollina Top 10 Pro-Business States ranking. Relative to Stage I factors, Kansas performed well in High-School Completion, College Completion, Unemployment, Right-to-Work status, Unemployment Insurance, Business Inventory Tax, and Infrastructure."

But in May, Kiplinger's Personal Finance named Topeka one of the 10 Best Cities for the Next Decade. High-tech hubs Austin and Seattle (numbers one and two) also made the list. The Topeka MSA was also recognized as the Biggest Gainer in the Milken Institute's 2009 ranking of the Best Performing Cities in the Small Cities category. Topeka climbed 69 spots to 37th place. Meanwhile, Topeka is a leading contender for the Google Fiber for Communities Project, wherein Google will build and test ultra-high-speed broadband networks in select communities of 50,000 to 500,000 people. Test communities will be announced by the end of the year.

Kiplinger's research, based mainly on work done at the Martin Prosperity Institute, focused on "places that specialize in out of the box thinking" and where "governments, universities and business communities work together" to create economic vitality. This combination nurtures "livability," which bodes well for a community's ability to attract the work force it needs to grow in the future. Topeka is rich in all three components, with state and local governments; more than 100 colleges, universities, technical and vocational schools, according to uscollegesearch.org; and businesses large and small that are expanding.

Look closer, and two more attributes become apparent: the area's work ethic and its logistics advantage in the geographic center of the mainland United States. Both are factors in the success of PT's Coffee Roasting Co., which competes nationally with better-known roasters in key U.S. markets and elsewhere.

Begun as a coffee shop in 1993, PT's added a vending cart downtown, and then a roaster to roast its own coffee. Before long, PT's was buying top-quality beans from international auctions and was expanding from a local retail operation to a wholesale business as well, necessitating a move into 5,000 sq. ft. of space in the Forbes Industrial Park adjacent to Topeka's airport. Retailers Target and Home Depot have recently opened distribution centers in the same area. Today, PT's is in larger quarters at the park, occupying about 15,000 sq. ft., and is in the midst of installing a new, larger roaster. The company employs about 30, half in the wholesale business and half on the retail side.

"We're now roasting coffee and sending it throughout the United States, and also a little into Canada and the Middle East," says Fred Polzin, co-founder and operations manager. "Most of our wholesale business growth right now is on the East Coast with a lot of that in the New York and Washington, D.C., markets." The company is now growing a sales staff and meeting demand for its products from coffee shops around the U.S. "We increased our coffee production by about 25 percent last year, and we're up again 25 percent so far this year. The new roaster will increase our capacity about fourfold, which will allow us to move into a different area with larger projects."

The company was named Roaster of the Year for 2009 by Seattle-based Roast Magazine and has second-place Barista (coffee bartender) championship finishers on staff. "We're a niche market, and we do direct trade with farmers that are committed to quality," says Polzin. "We pay above and beyond what the typical market price is in most situations, but knowing we can price it and sell it accordingly, because of the quality. We sell to very high-end, quality-conscious coffee shops."

The roaster being installed now is one of only a handful of that type in the United States; it's just come through a seven-month rebuild process, which Polzin says often results in a better quality roast than the original machine. "As an artisan roaster, we like that."

Polzin also likes the fact that customers can place an order on Monday, it's roasted and shipped Tuesday and is delivered by the end of the week for the weekend rush. "We're getting coffee turned around about as quickly as someone closer to them could, because we can get it shipped to them in three days, typically via FedEx Ground. I have friends on the West Coast who aren't even trying to do business on the East Coast because of the logistics of the shipping. People don't want a perishable product to take any more time to get there than it needs to. We can ship to either coast in three days, or closer in one or two days, so our Topeka location is a real logistical advantage."

That advantage allows PT's to operate successfully in Topeka virtually by itself. Polzin says competitors in PT's niche are typically located in metros distant from Topeka, such as Chicago, Los Angeles and Seattle.

Topeka delivers a local retail market, but it also provides a work force that fits PT's business model, says Polzin. "We have quality, hard-working, Midwestern-work-ethic people, which is so important to us. I hear horror stories about getting good employees elsewhere, but here, there's a great base of people who really work hard and do a great job."

Another logistics advantage has to do with meetings about coffee beans in locations near the Equator, says Polzin, and other kinds of travel. "We can easily travel south to the farmers on flights via Houston, or to clients on either coast with a short flight. We're rarely on flights longer than two or three hours, unless on international trips."

This Investment Profile was prepared under the auspices of GO Topeka, a division of the Greater Topeka Chamber of Commerce. For more information, visit www.topekachamber.org or call Steve Jenkins at (785) 234-2644.

The Home Depot opened a Rapid Deployment Center in January 2010, adding to the Topeka area’s cluster of distribution centers. The 465,500-sq.-ft. (43,245-sq.-m.) facility will employ several hundred people at full capacity. This center is one of about 20 the home-improvement giant is opening nationwide. 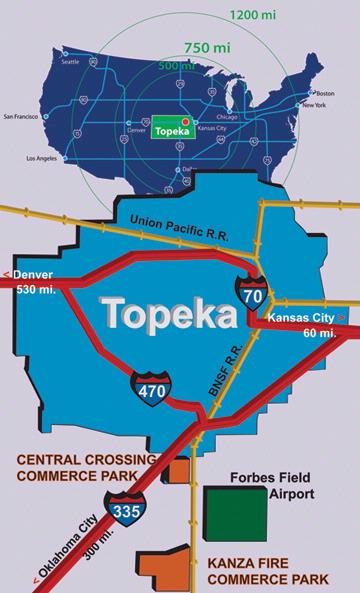