A Heartland Recipe for Wellness

Greater Des Moines has quietly become one of the leading financial service center markets in the U.S.
by RON STARNER
A 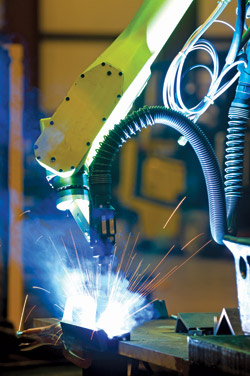 Ellison Tech in Council Bluffs is emblematic of the robust advanced manufacturing cluster that is rapidly spreading throughout Iowa.

governor with an ambitious agenda is proving that Iowans are even more resilient than he thought. Battling recession, floods and misperceptions, Gov. Terry Branstad is ahead of schedule in reaching his four main goals.

Less than 18 months into his term, Branstad has already put a serious dent into his top priorities of creating 200,000 new jobs for Iowans; reducing the cost of state government by 15 percent; increasing family incomes by 25 percent; and making Iowa's schools the best in the nation.

A year ago, when the country was still gripped by recession and Iowans were sandbagging homes and businesses to keep a 500-year flood at bay, not many would have predicted the results that the Iowa economy has delivered since.

In fact, those results are unprecedented. In the governor's first 16 months in office, more new jobs were created in Iowa than in the previous 12 years.

With US$3.35 billion in capital investment since January 2011, Iowa is on pace to shatter even more records.

"Our administration's goal is 200,000 new jobs for Iowans over the next five years," Gov. Branstad tells Site Selection. "To do that, we must first provide a business environment which is competitive with other states. I want to work with local governments to reduce commercial property taxes to less than the Midwest average. That will attract new businesses and jobs to Iowa.

"We also need to improve Iowa's economic development efforts," he adds. "My proposal was to establish the Iowa Partnership for Economic Progress, a public-private partnership similar to the successful efforts in Des Moines and other Iowa cities. Through the partnership, we will market Iowa's remarkable qualities and create new opportunities for job creation."

Iowa was second only to North Dakota last year in percentage increase in personal income.

The governor's job hasn't been easy. "We inherited a financial mess," he notes. "We had a projected shortfall of $800 million to $900 million, and we had to get the state's financial house in order. We got that done last year in a long and hard session. We now spend less than we take in. We accomplished that again with our budget this year. And we changed our economic development strategy to a public-private partnership. The Iowa Partnership for Economic Progress was created."

Under the leadership of Iowa Economic Development Authority Director Debi Durham, the partnership is now focused on revitalizing the state's manufacturing sector.

Those efforts are paying off, says the governor. Valent BioSciences is investing $146 million into a new biorational manufacturing complex in Osage; Korean-based CJ CheilJedang Corp. is building a $324-million amino acid factory in Fort Dodge; and Jolly Time Popcorn has just completed the largest factory expansion in company history in Sioux City. 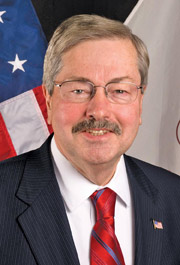 Gov. Terry Branstad, state and local governments and a host of growing companies have turned around Iowa’s economy in 18 months.

Mike Donaldson, president and CEO of Valent BioSciences Corp., based in Libertyville, Ill., says the selection of Osage for the high-tech plant was the culmination of a nearly four-year process.

"The first question we had to answer was 'Do we build in the U.S., China, India or another part of the world?' We ship products all over the world, and keeping the plant close to our corporate headquarters in Libertyville seemed to be the thing to do," Donaldson says. "Secondly, we wanted to be in a location where the cost of doing business is reasonable. That includes the cost of regulation, electricity, business taxes, etc. And equally important was the work force."

Iowa jumped to the top of the site search quickly, notes Donaldson. "We had a very rational discussion about our supply chain. We ship to over 92 countries. We already had a good infrastructure in Iowa," he says. "Iowa is right in the middle of the country and we can ship to either coast easily."

Donaldson also cites Iowa's "business and living environment" as conducive for growth. "The community and quality of life for our employees were very important," he says. "We wanted to make sure that the cultural alignment worked for VBS. It starts with location."

VBS considered sites in Illinois, Minnesota and the Southeast before selecting Osage. "We actually considered two sites in Iowa," adds Donaldson. "We had Osage and a second site a couple of hours away. We needed appropriate land and electricity, and ultimately Osage proved to be the best choice."

Donaldson credits Iowa government with making the choice an easy one. "This process just showed how easy it is to do business in Iowa," he says. "The state of Iowa was the most responsive to working with us in the early stages. The governor was very involved with us from day one. We were offered some property tax breaks, worker training benefits and other incentives to locate here, and the city and county also did a lot to upgrade infrastructure to support our plant."

Mitchell County chipped in by making the permitting process quick and easy for Valent, notes Donaldson. "Air permits, building permits — whatever we needed — the county helped us all the way through the Governor's Office and the regulatory process. By the time we applied for the permits, we had all of the data and background testing that was required."

A Bumper Crop of Investment

"We have grown significantly in the last four years," Smith says. "We had to expand by adding a 40,000-sq.-ft. production facility that will allow us to double our business."

The expansion allows room for eight new production lines on the 13-acre complex. "We are even talking about buying some additional production capacity," Smith adds. 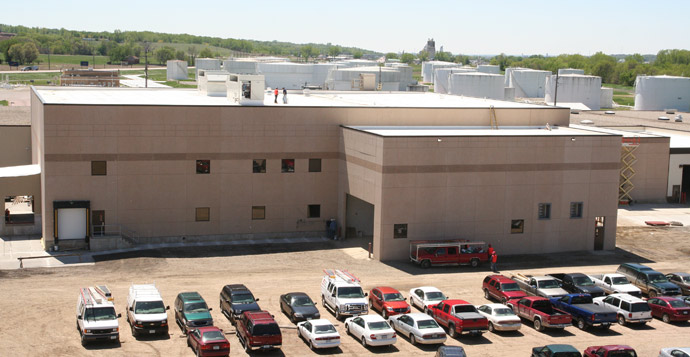 "Our No. 1 location advantage is that by being in Iowa, we are close to the source of our main ingredients," says Smith. "Everything we need is grown within a 120-mile radius of Sioux City. Secondly, the work force here is incredibly loyal, consistent and affordable. And thirdly, Iowa is a good place for companies that sell interstate commerce. I don't think Iowa gets enough credit for its single-factor sales tax, which is a huge plus for our company."

Smith adds that "we are a family company, and our growers are our family of growers. We have structured our benefits to reflect that. We pay 100 percent of family health insurance for our 180 employees. It is a pretty nurturing way of taking care of your workers."

Taking care of workers is job one for Gov. Branstad. In addition to bringing more jobs to Iowa, Branstad wants to raise the average annual wage of workers in his state.

"Unemployment in Iowa has dropped from 6.1 percent to 5.1 percent in the last year," Branstad says. "In choosing the key leadership in this administration, we have tried to change the culture of government. We have changed it to a mindset of public service. We have changed the way our agencies work from a regulatory standpoint. We now have a more friendly and collaborative environment."

"I don't think Iowa gets enough credit for its single-factor sales tax, which is a huge plus for our company."

That meant changing attitudes too. "We have implemented all new rules and regulations to make sure they are more business-friendly," the governor says. "We are also working to reduce the tax burden on Iowans. We want to extend the benefits of the single-factor sales tax formula to the supply chain in Iowa. That bill passed the House but not the Senate, so we are still working on that."

The governor is also working to reduce the commercial and industrial property tax in Iowa over a number of years and eliminate certain agricultural and residential property taxes as well.

While these efforts continue, incomes already are starting to climb. Iowa was second only to North Dakota last year in percentage increase in personal income.

"As we focus on STEM [science, technology, engineering and math] education and bio-sciences in our school system, we will begin to produce the kinds of jobs that pay better," Branstad says. "That includes traditional manufacturing jobs like those at John Deere, Alcoa and Pioneer Hi-Bred."

A Trifecta of Major Expansions

John Deere is investing $40 million in an expansion in Dubuque, Alcoa is investing $300 million in a new advanced manufacturing line in Davenport, and Pioneer will soon open a new 200,000-sq.-ft. regional distribution center for corn and soybean seed products in Spencer.

"Agriculture remains a very strong part of the Iowa economy," Branstad says. "We have 41 ethanol plants in Iowa already. Cargill and ADM are making all kinds of products from crops grown in Iowa. They will have several new products made from corn very soon. China recently purchased $4.3 billion in soybeans, and many of those came from farms in Iowa."

Branstad even sees Iowa taking on a lead role in helping to turn around the entire Midwest economy. "I serve as chairman of the Midwest Governors now. We want to be known as the Growth Belt," he says. "Iowa, North Dakota and South Dakota are all very strong fiscally now. Indiana, Ohio, Michigan and Wisconsin are following suit."

And then he adds a fifth goal — "We want to be known as the healthiest state in the nation," the governor says. "We started working with Gallup and Health Ways to measure this last year. We were the 19th healthiest state when we started. One year later, we are 16th. We now have communities all over Iowa competing to be Blue Zones — places where people live healthy, long lives. Wellmark's foundation has put $25 million into this public-private partnership. In the long run, this will be a great economic development tool, because healthcare costs are such a big item for businesses today."

This investment profile was prepared under the auspices of the Iowa Economic Development Authority. For more information, contact IEDA Director Debi Durham at 515-725-3100 or by email at debi.durham@iowa.gov. On the Web, go to www.iowaeconomicdevelopment.com.