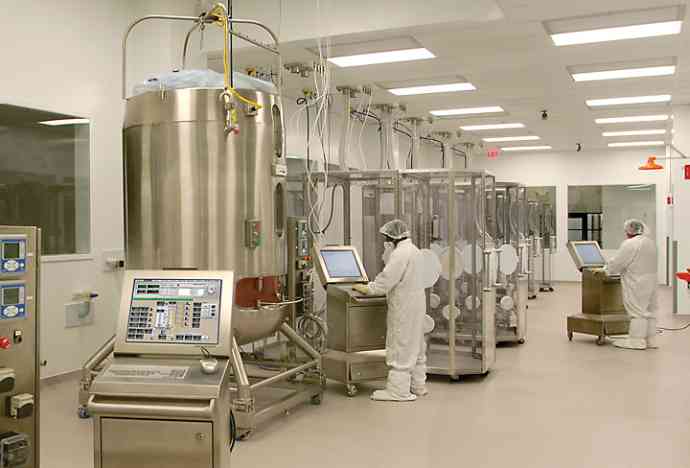 An Xcellerex employee works inside one of the company’s innovative flex factories in Marlborough, Mass.

harmaceutical companies needing to quickly expand their manufacturing capacity at lower cost and reduced risk now have an alternative — the FlexFactory® of Xcellerex, or what some folks call "bio-manufacturing in a box."

Based in Marlborough, Mass., Xcellerex is a biotech firm that integrates single-use products, building and process design and contract services focused on providing "disposable factory" options for drug manufacturers.

"We replace conventional stainless steel bio-reactors with bio-processing in a bag," says Kenneth P. Clapp, senior director of global marketing and product manufacturing for Xcellerex. "With our FlexFactory, a company does not have to invest in large 'clean-room' air handling systems, clean steam and clean-in-place detergents and large volumes of water normally associated with biologics manufacturing. Our technology relies on single-use disposables and controlled environment modules — a replacement for conventional clean-room space. That dramatically changes the infrastructure and size requirements of the plant."

Clapp explains the facility impact of this technology and the Xcellerex implementation. "We have taken a fresh look at biologics manufacturing in the development of FlexFactory. We have shrunk down the clean room to modules around each given unit operation. This means that a company no longer has to spend money on large clean-room areas," he says. "From the site selection side, we have the ability to provide a very specific footprint because we utilize single-use technologies. And our approach works equally well in greenfield sites or existing facility retrofits. A FlexFactory can be deployed equally as well in typical industry park space or in any number of current bio-pharma facilities."

Founded in 2002, Xcellerex now operates three FlexFactories in a 40,000-sq.-ft. building in Marlborough. The factories range in size from 3,000 sq. ft. to 5,000 sq. ft. The remainder of the building's space is used for offices, labs, utility support and warehousing.

"Each FlexFactory is capable of running at scales up to a 2,000-liter bio-reactor size," says Joseph Crowell, vice president of FlexFactory services operations for Xcellerex. "Each factory has a full upstream and downstream train. Our facility is much smaller than traditional biopharmaceutical manufacturing plants. It is roughly 50 percent smaller on average when compared to a traditional stainless steel facility of similar scale, and published studies show that running a disposables-based operation can save the client as much as 50 percent on utilities and overhead costs. A couple of the biggest factors in these numbers are that a disposables-based process does not require clean-in-place [CIP] or steam-in-place [SIP], meaning you don't have the heavy water demands for cleaning, and you don't have to produce large amounts of plant and clean steam, so you save significantly on both water costs and energy costs."

Crowell says, "Xcellerex is working with a number of clients of various size companies. While a significant portion of our business has been small to mid-sized bio-pharmaceutical companies, we are now seeing the large companies, who tend to be the slower adopters of new technology like ours, starting to show significant interest. We still see ourselves in the exponential phase of the company's growth curve, likely on the earlier part of the curve, but we are climbing fast."

Clapp says Xcellerex is also targeting biotech companies that are looking to establish their first or next factory in the USA or elsewhere in the world.

"We are especially interested in targeting firms in emerging markets and biotech hubs, from North Carolina to Singapore," says Clapp. "Our goal is to speak with the executive team about site selection at each firm."

Clapp notes that Xcellerex completed construction of a new FlexFactory at the company's Marlborough facility complex last fall. "We use that factory to produce biologics for some of our customers now — we call this BridgeSourcing™," he says. "The Marlborough facility allows us to produce clinical material for our customers before, during and after their own manufacturing facility is completed. It gives them the ability to produce product without losing critical time-to-market. Ultimately, moving manufacturing to their own facility is part of our Transplant™ process."

That also reduces risk, notes Crowell. "This way, a company does not have to put up huge amounts of capital up front while the firm is still in jeopardy of its drug not receiving FDA approval," he says. "There is not a long construction time with our disposable plant, so we can get up to speed on production very quickly for our clients."

The company notes that its unique bio-manufacturing platform can save a drug-maker up to 60 percent in capital investment and results in an 85-percent reduction in water and waste.

The carbon footprint, compared to a traditional operation, can be reduced by 55 percent; and the production line can be rolled out in seven to 12 months, as opposed to three to five years in conventional manufacturing.

The rise in "small-market" drugs that do not require the production scale of large-market drugs has increased the demand for rapid-deployment models. Increased competition, along with shorter patent protection timelines, has further ratcheted up the time-to-market pressure, according to the company's Web site.

"For the existing assets out there, FlexFactory should be able to fit well within almost any retrofit," Clapp says. "In those cases, their space can be reconfigured. With our technology, you can use the same facility for another product — even simultaneously."

"From a state or region's point of view, if a company or product fails, there is no longer an obsolete facility going vacant," he says. "The building or space can be easily repurposed for alternate use."

The technology was first developed by company founder Parrish Galliher in 1999 and 2000 while working elsewhere. The project was known as "Bugs on Wheels," and established the controlled environment module — the shrunken down clean room. Operating in a warehouse, his team confirmed this new technology was able to expand manufacturing capacity and make product in record time with much lower investment. He started Xcellerex in 2002, and soon the team developed the bioreactor and mixer product, initially for internal use. "We have since combined this know-how into our unique business model," says Clapp. "We enable any company to have biomanufacturing capability in their own hands."

This corporate profile was produced under the auspices of Xcellerex Inc. For more information, contact Kenneth Clapp, at 484-695-5844 or by email at KClapp@xcellerex.com. On the Web, go to www.xcellerex.com. 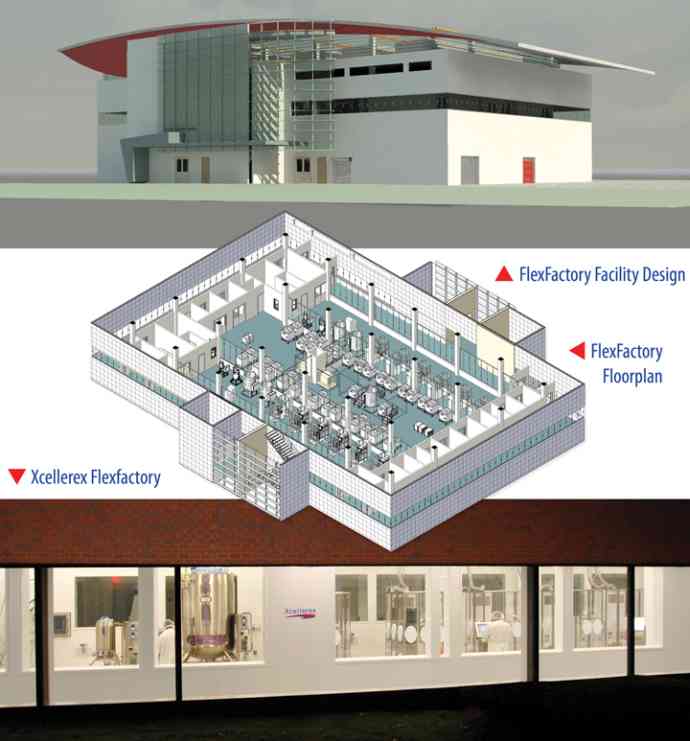